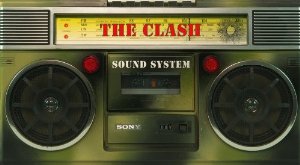 In the far distant past – 1979, to be exact – the Clash were crowned “The Only Band That Matters.” The mantra originally appeared on a promo sticker stuck to their double LP London Calling. Initially coined by their label’s A&R director, it soon was accepted by fans and followers as a truth self-evident.

Since then, Fugazi wore that “Only Band That Matters” crown of thorns, thanks to Rolling Stone magazine. U2 front man Bono has done his best to appropriate it, but never quite grasped the golden ring. And these days, Pussy Riot may be the just and righteous successor. In all, it’s one heavy mantle to bear for a little old rock and roll band.

The echoes of that mantra still resound around the Clash and thus, it’s time (again) for (another) band retrospective. The Clash has released several previous box sets of different sorts – greatest-hits collections, a singles collection, and more. But the passion for the band continues.

Sound System is a full-bore box set, the biggest and best of the lot, hands down. And the last one ever, the band promises. The package was crafted by bassist Paul Simonon in a boombox (remember those?) replete with reprints of period stickers, poster, liner book, fanzines, and even Clash dogtags. Oh yeah, and there’s the music – lots of music: the band’s ﬁve studio albums remastered on eight CDs (with Cut the Crap thankfully cut), plus three discs of demos, non-album singles, B-sides, and other oddities and rarities. And ﬁnally, there’s a DVD chock full of unseen footage of the band from the beginning through the end, as well as 10 promo music videos. Phew!

The remastered albums sound great – clear and bright. As Mick Jones explained, “That was the musical point of it all, because there’s so much there that you wouldn’t have heard before. It was like discovering stuff, because the advances in mastering are so immense since the last time [the albums were] remastered was in the ’90s.” You can hear guitar lines on several songs – including some London Calling tracks – that you swear weren’t there yesterday. As Jones joked about the newly discovered guitar tracks on “Safe European Home,” “It’s probably some session musician, while I was asleep.”

The biggest surprise here is on the DVD, however. The “White Riot” promo film, an early gig at Sussex University in 1977, and Super 8 footage shot by producer Don Letts are all phenomenal. They show the band as tough, young, punkrock guitarslingers. And that’s only a third of the videos.

So, now the question is, three-plus decades later, do the Clash still matter? At all?

If you count the number of junior high-schoolers these days wearing Clash t-shirts, the answer must be a resounding yes. Of course Craig Finn of the Hold Steady recently conferred sainthood on Joe Strummer. And listening to these albums for maybe the ten-thousandth time – courtesy now of Sound System – they sound as fresh and raw and powerful as ever.

If you don’t want the full-caffeine box set, 5 Album Studio Set is being released simultaneously with just the remastered albums. And a new greatest hits package, The Clash Hits Back, collects the remastered best.