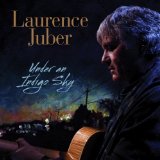 The latest from Lawrence Juber will befuddle guitarists who struggle simply to work up solo versions of songs in standard tuning. Here, Juber has compiled 14 songs for solo guitar – some standards, some more current, and several originals – and plays them all in DADGAD tuning. And each and every one of them is a wonder.

Juber uses all his weapons. He mixes bass notes with melody flawlessly, throws in chords to keep things moving, and even on several cuts uses the guitar’s body as a percussion instrument. There’s a laidback feel to tracks like “Cry Me A River” and his original title cut. He makes the oft-recorded “Don’t Let Me Be Misunderstood” sound like it was written for just this kind of treatment.

On “Runaway,” he takes the familiar descending chord pattern and turns it into an acoustic masterpiece. He even cops the keyboard part that propels the Del Shannon original.

Juber draws every bit of emotion out of several classics. “Autumn Leaves” gets a moody treatment and his playing on “Smile” is every bit as lovely and poignant as the lyrics.

As always, Juber shows here he’s much more than just a former guitarist in Wings.