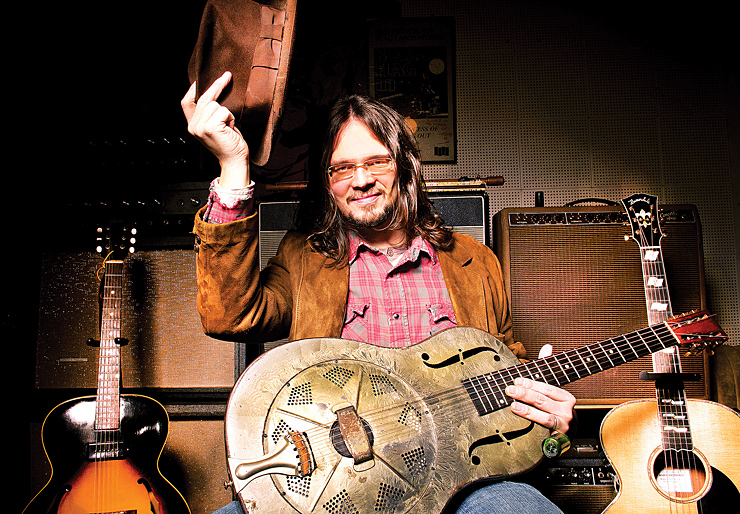 When Luther Dickinson isn’t writing and performing with the North Mississippi Allstars or on the road with The Black Crowes, he plays the acoustic guitar – and lots of it. He recently released an acoustic instrumental record called Hambone’s Meditation, a project called The Wandering featuring female singers from North Mississippi and Memphis, and the latest from the South Memphis String Band – an album called Old Times There, which features Dickinson, Jimbo Mathus, and Alvin Youngblood Hart. He’s also releasing a 78-rpm record on the Tompkins Square label with the songs “Zip-A-Dee-Doo-Dah”/“Beautiful Dreamer” on the A-side, and “Nobody Knows The Trouble I’ve Seen”/“Peace in the Valley” on the B.

These projects are all deeply linked by Dickinson’s love of acoustic instruments and his deep affinity for his Southern roots.

How is it you’re releasing four acoustic records at the same time?
It wasn’t planned. In 2009, I started concentrating on acoustic projects, and they’ve accumulated. At home, I don’t even have an amp; I don’t unpack my electric guitars. I have a house full of acoustic guitars, and they’re really my love.

Even when I play with the North Mississippi Allstars, what I’m trying to do is get across an acoustic-guitar country blues aesthetic in a rock setting. That’s what I started the band to do, trying to play Fred McDowell acoustic with a trio.

On Hambone’s Meditation, it sounds like you just couldn’t wait to get back to that sound.
(Laughing) I grew up on John Fahey because of my father, but he used to freak me out. That bizarre personality of his comes through in his music. But Jack Rose is the one who inspired me to do Hambone’s Meditation. Those first couple of records just killed me. He was from Virginia, but he had a kind of a Piedmont/ragtime feel that’s unique. He was such a strong force and you could really hear his personality in his records. He inspired me, and I grew up with a more-natural affinity for writing songs and the creative process than I did for actually playing or singing. That was really what got me going; I had to learn how to play. Singing was a constant tightrope. It never dawned on me to do an instrumental acoustic record until I heard Jack Rose. Then I said, “Wow! I can do this.”

How did you meet the ladies on The Wandering?
I’ve known all of them off and on for years. I’ve known Valerie June only by reputation. We weren’t friends, but I’ve known Shannon McNally for years, playing around in Mississippi; my dad produced her. Amy LaVere and I grew up on the scene together, and I’ve known Sharde Thomas since she was nine. She’s the secret weapon. Her drumming is so funky. My wife and I saw Valerie playing her banjo, and that led me to thinking this could be a cool little combo.

I play mainly guitar and mandolin. I didn’t originally want to play; I was just going to produce, but it was so much fun. There’s nobody playing melodic instrumentation, so I couldn’t resist once we got set up.

It’s great Sunday-morning listening…
Yeah (laughs)! I like records you can listen to first thing in the morning or late at night.

With the South Memphis String band, how do you decide who plays what?
We work around whoever brings a song in. Whoever is singing is usually playing a guitar. Jimbo has a beautiful handmade fretless banjo and also a tenor banjo. His banjo playing on the new record is really the secret weapon. Alvin and I do a lot of de-tuned guitar work, and we all play mandolin. We just kinda pass the instruments around depending on which tunes are going on.

How did the Tompkins Square 78 Series come about?
We recorded that a couple of years ago and it has taken awhile to get the vinyl situation right. We’ve been waiting to get the packaging just the way we want it. It was a rare opportunity and I could not decide what I wanted to put behind my name on a 78. The original idea was to do it with an acoustic guitar and a small Walt Disney/cartoony orchestra, but I couldn’t get it together.

I’m very happy with it, and practiced a lot on it. I’ve played songs for solo guitar but never done an arrangement like “Beautiful Dreamer.” It was really fun.

Any plans for another North Mississippi Allstars record?
I’ve been writing like a fiend. I’m working on two Allstars records right now. One is kind of more rock and roll, the other is a more traditional North-Mississippi-style.

Any word from the Black Crowes?
Hey man, if they call me up I’ll consider it. I don’t know what they’re up to. They’re a great band and so much fun to work with. I love the songs and love the musicians.

Have you bought any new toys lately?
I’m trying to quit (laughs)! But I just got a Harmony Rocket, an old Ludwig bass drum that’s been a lot of fun, and an old four-knob Princeton. I finally found the perfect guitar for the Allstars. It’s basically the Gibson 335. It has an acoustic quality, but it can also take the volume of the environment. Chris Robinson gave me my first 335 and I’ve been hooked ever since. Gibson and I are working on a signature 335 that I’m really happy about. It won’t be a Custom Shop model. It’ll be affordable, and I’m really excited about it. For solidbody guitars, I got hooked on the SGs. It’s my favorite solidbody sound.