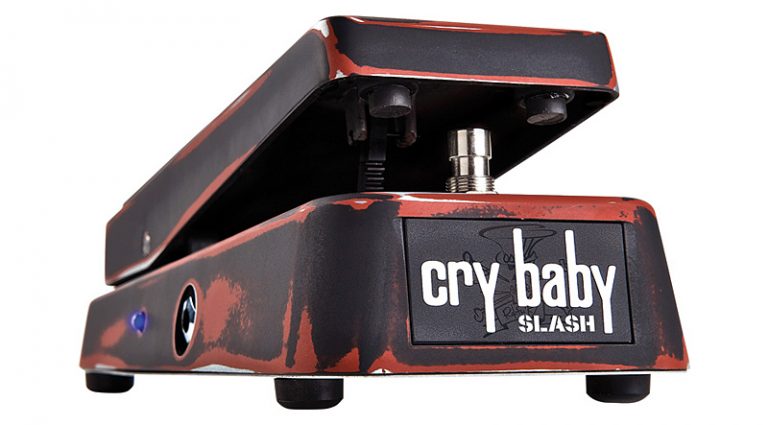 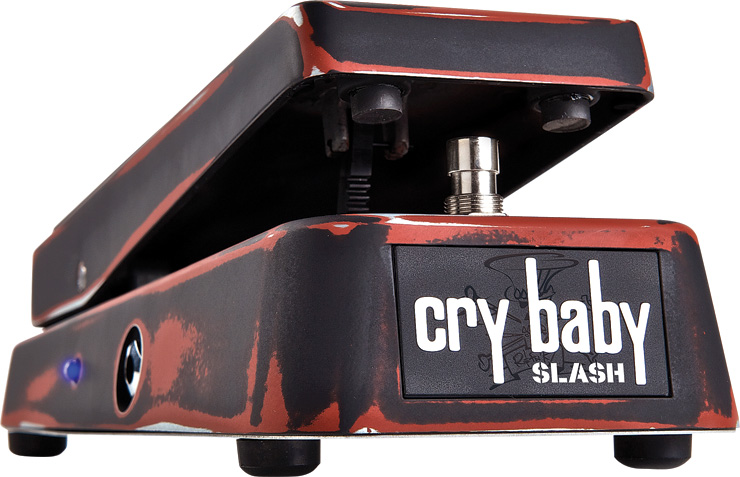 MXR’s new Slash Octave Fuzz pedal employs three fuzz “flavors” – Sub-Octave, Fuzz, and Octave Up – that offer a palette of distinctive, utilizable sounds. The pedal, built with analog circuitry, true-bypass switching, and a heavy-duty housing, sports custom artwork with Slash’s famed tophatted-skull-and-crossbones motif. In developing the Octave Fuzz, Slash worked with MXR’s design team, and while few may associate Slash with the octave-fuzz effect, he uses it on occasion to color his sound, not overpower it. One place you can definitely hear it is on his latest studio album, Apocalyptic Love, where Slash provided input to the Dunlop design team while they tweaked prototypes.

There are two footswitches on the pedal; the left one (On) engages the pedal, while the right (Up) engages the octave-up fuzz in addition to whatever mode the user has configured. Internal trim pots control intensity and overall EQ of the octave-up effect. Given its many options, it does take time and experimentation to understand the controls and how the effects interact. To test the pedal, we used a Gibson Les Paul (with humbuckers) and a 120-watt/EL34-driven amp, which provided an excellent platform to hear the pedal with minimal coloration.

You can use the pedal’s Sub Octave function without adding fuzz, which is how we started; in order for the clean signal to roughly equal the signal coming out of the pedal in this mode, the pedal’s Volume knob must be turned up all the way. Used this way, the effect sounds very good and tracks quite well, providing hefty tones when mixed with the clean signal. When you engage the Sub Into Fuzz, the pedal bumps output significantly, so you have to roll off the Volume knob before doing so (with the Sub Into Fuzz circuit engaged, the Volume knob becomes the primary output-level control).

In designing this pedal, one of Dunlop’s goals was to develop a more-predictable version of the ’70s MXR Blue Box fuzz pedal, and the Slash achieves that. By blending its fuzz with the sub-octave effect, it can generate prime razor-cut-speaker tones, oozing with sludge and perfect for whipping out cool Deep-Purple-type keyboard riffs. 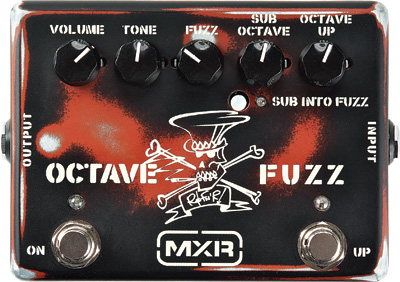 To continue our orange-shag-carpet trip, we bypassed the sub-octave effect and used the pedal as a straight fuzz unit, which rendered some hairy, mind-bending tones. No doubt, though, the pedal’s strong suit is the ability to utilize the Sub Octave and Octave Up features, individually or together. The Octave Up effect is conjoined with its own fuzz sound that is blended using an internal gain trim. Turned all the way down, it adds just a touch of fuzz that sounds unique. In that context or in combination with the Sub Octave and the main fuzz, the pedal steps into Hendrix-like territory; particularly when a Strat is used to launch those familiar riffs.

One feature we found particularly cool was the ability to bypass the fuzz. If you’re looking for a different sort of overdrive or distortion along with a sub-octave effect, this unit can deliver. Again, you can’t separate the Octave Up from its associated fuzz, but you can control the blend of the effect in the overall mix. We gave it a try through a 100-watt Marshall head, where the amp’s natural overdrive, blended with the Sub Octave, created a monolithic sound while retaining the amp’s natural overdrive. Awesome!

There are a multitude of tones waiting to be discovered with this unit. Numerous voicings are accessible by experimenting with the interaction of different controls and switches. Whether you want to use the effect subtly to thicken up your tone, or in copious amounts to shake the collective innards of your audience, the MXR Slash Octave Fuzz has some great sounds awaiting discovery.
* * * * *

The wah is an iconic and enduring guitar effect – steady favorite tool of expression for players of all genres. In recent years, many high-profile players have tied their names to “signature” wah pedals that tweak the output or some mechanical nuance. The new Cry Baby Classic SC-95 was conceived with input from the cat in the hat himself, who has thrown down a notable wah passage a time or two.

If you’re going to test-run a pedal with Slash’s name and imagery attached, logic would dictate you use his guitar of choice – a Les Paul with humbuckers. So we did, plugged into a 100-watt Marshall head and 4×12 cab… cranked. Immediately, the pedal proffered familiar rock-and-roll wah sounds the likes of which have been heard by millions over the years. The first distinctive attribute was the Slash wah’s wide sweep – a rich, vocal-like sound that maintained the fundamental tone of our rig. Dunlop tuned the pedal’s EQ sweep to a lower frequency, which helps give it a warm, thick sound devoid of harshness at any point. Not too dark, not too bright.

Through a 15-watt/EL84-based combo, we were happy to hear how the pedal produced the same characteristics as through the arena-sized rig. With a single-coil Strat running clean through a 2×12 cab and playing the obligatory “Shaft”-style funk/rhythm, it performed admirably.

The LED indicators are great a feature, especially when playing live, and the graphics (inside and out) look pretty cool, too. If you’re needing a wah that delivers a unique tone, looks sharp, and is well-built, the Slash Crybaby Classic is worthy of consideration.