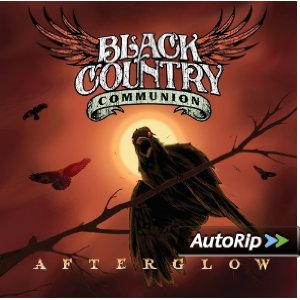 Unfortunately Afterglow takes a step backwards. Due to Bonamassa’s heavy touring schedule, songwriting duties were left on the shoulders of Hughes. He gets help from Bonham on the arena rocker “This Is Your Time” and Rush’s “Tom Sawyer” inﬂuenced “Common Man,” but overall the record lacks the breadth of their earlier work. Reminiscent of a Hughes solo record, Bonamassa’s predilection for the cinematic blues pastiche is sorely missed.

Sherinian is unleashed on the Who sounding “Midnight Sun” while Bonham’s machine gun drumming is absolutely killin’ on “Big Train.” Bonamassa is sweet and incendiary on “Confessor” and his trade-offs with Sherinian on “Crawl” is exceptional. Hughes’ compositions are strong à la “Dandelion,” but his caterwauling vocal style is a little much. Bonamassa isn’t there to give us a break, except on the blues-rocking “Cry Freedom” where they share vocals. Hughes calms down on the mellower “Afterglow” but the big 1970s rock scream that few mortals can achieve is what he does best.

Despite Hughes’ wailing, Afterglow is a satisfying record. Bonamassa’s lack of song input and vocals fail to balance out what was once a complimentary pairing, but the band still delivers great playing, conviction, and epic songs.