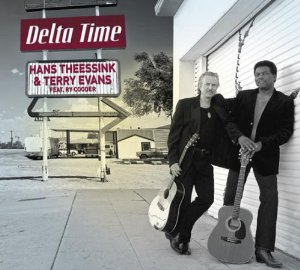 Despite the title’s implication of down-and-dirty blues, this is closer to what we think of as folk music. Of course, the blues is exactly that, but Theessink and Evans’ blues is more the folky, ragtime-inﬂuenced East Coast blues and gospel-anchored music of Pops Staples than Delta blues. It’ll be considered “blues” in Europe, but “folk music” in the States, especially alongside the work of artists like Gary Davis, Josh White, and Staples.

Evans’ long association with Staples may be part of what drew him and Theessink together; both seem most comfortable with a little gospel in the mix. As a player, Theessink is as deft as the best of his type but his clean ﬁnger-picking is purposely not always as complex. On the more traditional blues of Elmore James’ “It Hurts Me Too,” his acoustic guitar recalls Buddy Guy’s understated work with Muddy Waters on the Folk Singer album.

A fun revisit of Jewel Aiken’s “The Birds And The Bees” has Evans singing and Theessink on mandolin. Theessink also plays some banjo, harmonica, and “footstomper” on the album, but otherwise this record is down to the essentials – voice and guitar.

Evans has sung background for Ry Cooder, who guests on three cuts, playing slide on “How Come People Act Like That.” The call-and-response vocal, straightforward meter, and ﬁnger-picked acoustic link the song to all the styles mentioned above. This one, the James tune, and Evans’ take on J. B. Lenoir’s “Down In Mississippi” are the disc’s ﬁnest moments. They seem like the songs Theessink and Evans had in mind when they came up with the good idea of making this album.