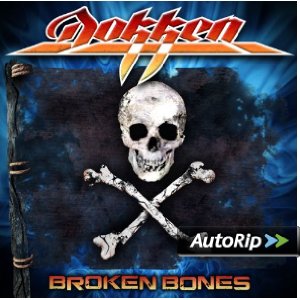 Dokken is still going strong with their 11th studio album Broken Bones. With vocalist Don Dokken as producer, it’s an album that is shameless in its mission to reproduce the sound that made the band one of the top recording and touring acts of the 1980s. Though half the classic lineup is long gone, the group still retains drummer Mick Brown and, of course, Don Dokken on the mic.

Sean McNabb on bass and guitarist Jon Levin follows a series of guitarists ﬁlling George Lynch’s wicked shoes. Beginning with the opening track, “Empire,” this album makes no apologies for sounding as close as possible to classic ’80s era Dokken. Although the album beneﬁts from a much improved and less dated production style, the signature songwriting remains intact.

Levin nails every nuance of Lynch’s patented guitar style. Every squeal, Gothic Octave run, and slippery vibrato is reproduced to perfection. If you didn’t know it was Levin on guitar, you’d swear that Lynch was back in the band. On “Blind,” Levin rips up the fretboard in a dazzling display of Lynchian pyrotechnics, while on “The Victim Of The Crime,” the band stretches out a bit stylistically, but only to the extent that it sounds like something that would appear on a Lynch Mob record.

Broken Bones features the strongest Don Dokken vocal performances ever recorded, particularly on the ballad “Today,” with its rich and haunting acoustic guitar lines. There’s nothing new here. You won’t ﬁnd any musical growth or socially relevant lyrics – but the album is truly “Rockin’ Like Dokken!” And it happily lacks the paper-thin commercial hooks of their heyday. It’s a solid but derivative effort. The fans have spoken. They wanted the old Dokken, and they’ve got it.