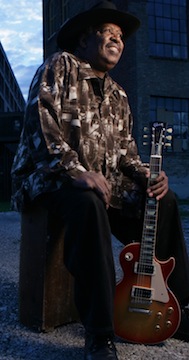 Morris Holt, the blues singer and guitarist known onstage as Magic Slim, died February 21 at a hospital in Philadelphia. He was 75 and had been battling various health issues including bleeding ulcers.

A contemporary of fellow post-war electric-blues legends including Muddy Waters and Howlin’ Wolf, he tried to gain foothold in the Chicago music scene after moving there from his native Mississippi in 1955 as a bassist backing his mentor, Magic Sam. Finding the scene too competitive, in 1960, he moved back home, where he picked up small gigs and honed his guitar chops. He returned to Chicago in 1965, this time with brothers Nick and Douglas as his new rhythm section and going by the name Magic Slim and the Teardrops. The group quickly gained notoriety for Slim’s playing style and vibrato-laden tone, as well as his aggressive vocals. He recorded a few 45-rpm records for the Alligator label in the mid ’60s, then his first album, Born Under a Bad Sign, in 1977, after which he released nearly 40 albums for several labels over the course of his career. His final album, a group of covers called Bad Boy, was released in late 2012 on Blind Pig. Holt is survived by his wife, Ann, four sons, and one daughter.