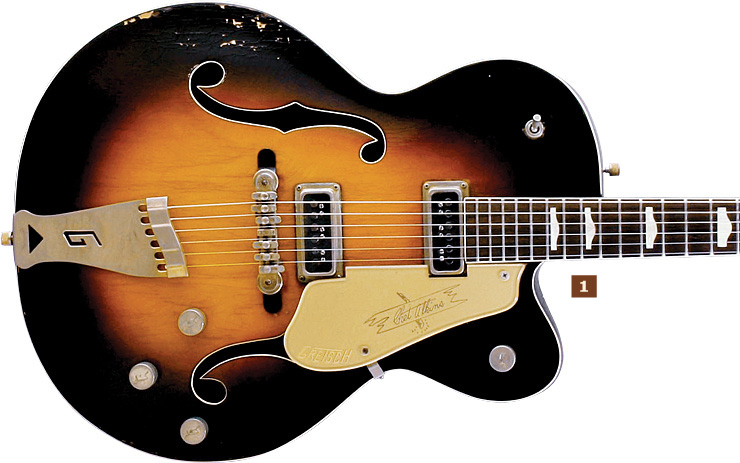 1) This ’57, from batch 253xx, has the added intrigue of a gold G-cutout tailpiece in place of the Bigsby vibrato. In addition to the standard Amber Red stain on the 6120, the Bigsby was requisite on the Atkins-endorsed models. Having a 6120 that lacks both the finish and the vibrato seem to constitute heresy! Other than the horseshoe headstock motif and the gold “signpost” pickguard, it’s hard to recognize this specimen as a 6120. Its identity is validated, however, by the model stamp on the paper label inside the guitar’s body, as well as the confirmation that its serial number jibes with a documented batch of 6120s. The original owner was reportedly a jazz musician and a fan of Atkins who presumably didn’t appreciate Western Orange or require a Bigsby. The Melita bridge was probably more attractive to such a player for its ability to fine-tune, and it’s also possible the guitar was more resonant. In 1957, Gretsch didn’t offer a 16″ dual-Dynasonic archtop other than the 6120, so this was most likely the only way to acquire a Gretsch that fit his needs.

When the Gretsch Company introduced its Chet Atkins Hollowbody model 6120 guitar for the 1955 model year, it was not making a subtle statement. In addition to the impossible to ignore G-brand affixed to the body, the steers-head motif on the headstock, and the cowboy-styled engravings in the fretboard markers, the Western panache of this guitar was only amplified further through its ostentatious Amber Red (a.k.a. Western Orange) translucent stain finish.

Although a flagship model for the company, these guitars experienced a multitude of feature evolutions from its 1955 debut in full-blown Western flavor, until the last batch of the more streamlined single-cutaway format in ’61. About the only feature that escaped modification over these years was the signature finish. Even when the 6120 was subjected to a complete redesign for the ’62 model year, and the double-cut sealed-top Electrotone body design was incorporated, the Western Orange finish was retained and provided one of the primary indicators to the buying public that these were still Chet Atkins 6120 guitars.

As a result, for most Gretsch enthusiasts, the Western Orange finish on the 6120 has become iconic, and synonymous with the model, and shared only with the companion 6121 Solidbody. Typically, most Gretsch models were produced from the Brooklyn factory in batches of 50 or 100. But in the case of the 6120, many batches included a quantity of 6121 Solidbody models. This was a curious practice, duplicated to a lesser extent with batches of White Falcon (model 6136) and White Penguin (model 6134).

Gretsch has been recognized for pioneering, and subsequently popularizing, the use of colored finishes on its electric archtop line of the ’50s. Many of these hues, and their use in combination, were inspired by the automotive stylings of the period. As a result, most of the company’s models were available in multiple finish options, while the 6120 remained steadfast in its commitment to the Western Orange aesthetic.

This didn’t necessarily mean it was impossible to acquire a 6120 in something other than orange. It simply meant that for most it was unthinkable. However, there are always those who prefer the road less traveled. Perhaps some musicians were attracted to the sonic qualities the 6120 package, but just weren’t interested in presenting the kind of visual impact the standard finish delivered. For these few, the Brooklyn factory would create – on a one-off/custom-order basis – a Chet Atkins 6120 in something other than Amber Red.

In the seven years the Chet Atkins 6120 was manufactured in the single-cutaway format, there were approximately 50 batches of the model produced, translating to no more than 4,000 guitars. Today, these are among the most popular Gretsches, and appear regularly on the secondary market. Only on rare occasion however, does a custom-color single-cut 6120 surface. Ironically, when they do, they tend (with a few exceptions) to not be finished in one of the company’s automotive-inspired options, but instead in the more pedestrian brown-sunburst the company applied to most of its base model electric archtops. On the face of it, and considering the model in question, this might seem counterintuitive. But if the objective was to not stand out in the crowd, what better way to understate the visual of the 6120 than to mute its flamboyance through a more-traditional archtop finish. 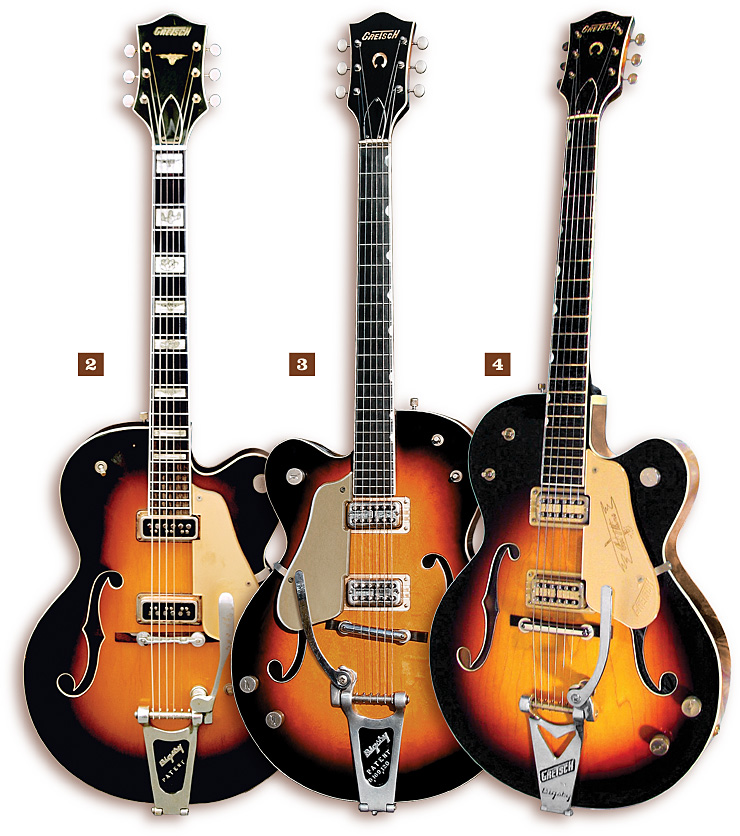 2) One of the earliest 6120s to surface in the brown-sunburst finish, this guitar resides in the 185xx batch from 1956. Further disguising itself from the original, it lacks the G-brand on its lower bout, and the gold-Lucite pickguard (which is original) does not have the Chet Atkins signature signpost motif. This guitar retains the Western-style accoutrements such as the etched “cows and cactus” imagery on the fretboard markers, and the inlaid steers-head motif on the headstock. The hardware conforms to ’56 spec, with dual gold-plated DeArmond Dynasonic pickups, arrow-motif control knobs, and a chrome-finished, enamel-faced Bigsby B6 vibrato, with a fixed arm and spoon handle. Open-back Waverly tuners and a large truss rod cover on the headstock are consistent with the standard 6120 package of the day. The label has a 6120 model stamp, and the 185xx serial number batch is a confirmed group of 100 6120 guitars.

3) Perhaps one of rarest 6120s, this ’59 from batch 325xx was a custom order in ultra-rare left-handed orientation. The finish is rare enough, but consensus among “Gretsch-perts” is that the company made fewer than 100 left-handed guitars in the ’50s and early ’60s. Today, the ’59 is one of the most-desirable iterations of the 6120; they employ Filter’Tron pickups, elegant neoclassic fretboard markers on an ebony fretboard, and an optimized version of the internal (trestle) bracing system introduced to the 6120 the previous model year. This guitar has all that, but it may not command the price of a standard-finish/right-handed 6120. That aside, its rarity could make it quite a prize for a hardcore 6120 collector. It’s all-original and displays the signature ’59 features of a zero fret, “Patent Applied For” Filter’Tron cases, enamel-faced Bigsby B6 (with Philips-head bolt) and the aforementioned lighter trestle bracing in its 2.75″-deep body. The plain pickguard is commonly found on lefty Gretsches.

4) The 1960 model year 6120 is easily identified by its adoption of the V-style Bigsby B6 vibrato unit, (and less obvious to the casual eye, a thinner 2.5-inch body depth). This handsome specimen, from the #388xx batch, retains those features as well as the horseshoe inlay in the headstock and the gold Chet Atkins signpost pickguard. It is also the most recent member of our sunburst-finished 6120 line-up. Another interesting aspect of this guitar is the survival of its original bill of sale, dated October 27, 1960. The other valuable information this original receipt provides is documentation of the $25 premium charged for the custom color. With an original retail price of $475, that would have made the pursuit of a custom color 6120 a relatively affordable prospect, and it’s interesting that more weren’t produced. Presumably, that’s more of a testament to most Gretsch fans’ inability to disassociate the classic Western Orange finish with the Chet Atkins model 6120.

The small fraternity of original Gretsch owners who opted out of the flashy Western Orange 6120 have, 50 years later, created a challenge for current owners of these rarely encountered anomalies. First, it’s not unreasonable to assume that if a collector or musician were seeking to acquire a vintage Gretsch 6120, he/she would probably desire it to be finished in the celebrated Amber Red stain. Second, there seems to be a natural skepticism about these brown-sunburst specimens, and questions regarding their legitimacy often result. Recent serial number and batch analysis has been helpful in these cases, as well as for determining the authenticity of any guitar being represented as a Chet Atkins 6120. The fact that periodic attempts have been made to pass off “6120 conversions” (from lower-end Gretsch donor guitars) as legitimate Chet Atkins 6120s have made prospective buyers wary of even certain Western Orange examples. So, when an uncommon specimen, not to mention one with a brown-sunburst finish, surfaces, it tends to raise even more eyebrows. The following specimens are authenticated examples of the ultra-rare Gretsch Chet Atkins 6120, in the custom factory brown-sunburst finish.

As the ’60s progressed, custom-color/double-cutaway 6120s became more numerous, most sporting interesting hues (not the brown sunburst!). By then, however, the Western aura of the original had all but faded, and the signature finish was losing its impact. In the spring of ’72, the sun set on the Western Orange finish as the Baldwin Piano Company, which had taken over the brand in ’67, discontinued the finish as it revamped the model, giving it a red finish and reassigning it as the 7660 Nashville.

Ed Ball is the author of Gretsch 6120, History of a Legendary Guitar (Schiffer Publishing).