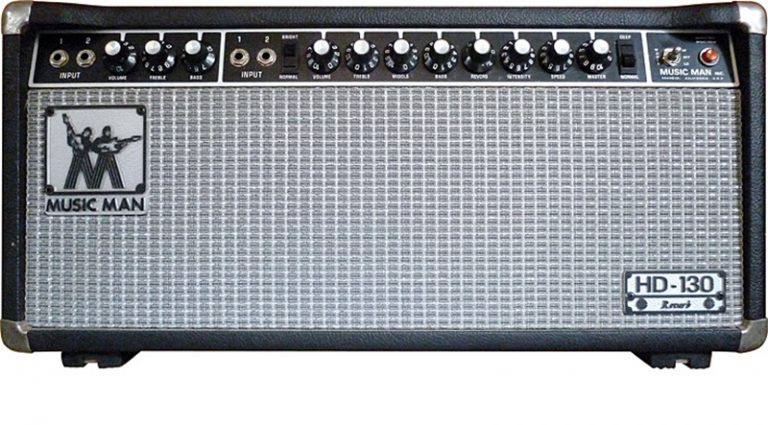 Intended to be the masterpiece of a titan in guitar-amp design, Music Man amps of the mid/late ’70s are all too easily mistaken for copies or wannabes chasing a market leader. Far from it, however, this flagship model really is the final evolution in a sonic goal Leo Fender had been working toward for three decades, even if it was introduced into a world largely chasing different sonic goals at the time.

Just as Fender’s clear objective through the tweed era and into the Tolex years was always wrapped up in the quest for “clean, clarity, headroom,” Music Man amps arrived on day one born to do just that, and in ways intended to leave Fender’s Twin Reverb – then produced under C.B.S. ownership – entirely in the dust. As such, the HD-130 Reverb makes a great lesson in the thinking of the day – a glimpse at what could briefly have been considered the state of the art in mid-’70s amplification.

As is well-documented, Leo Fender signed a non-compete clause when selling his company in 1965, and was retained as a consultant for several years after. Regardless, in 1971 he quietly established a company called Tri-Sonic, with former Fender colleagues Forrest White and Tom Walker. In ’74, as the end of his “hush period” approached, Tri-Sonic changed its name to Music Man, then named Fender as president in ’75, when it was legally able to do so. The company hit the ground with an amp – the Sixty-Five combo – in the works, then unleashed a range of head and combo variations of its big boy, the HD-130 (known as the 212-HD and 410-HD in its most common combo forms).

Whether in head or combo form, the HD-130 Reverb was clearly intended to knock the silverface Fender Twin Reverb off its roost; in terms of performance, many owners would tell you it did. Packed with the popular onboard effects of reverb and tremolo, the Music Man developed a whopping 130 watts from an output stage comprised of four 6CA7 tubes (a U.S. version of the EL34), but used a solidstate preamp circuit in each channel for a clean, reliable signal chain. Earlier amps, like the ’77 model featured here, used a 12AX7 in the phase-inverter stage that was later changed to a solidstate inverter circuit, too.

Evaluated in hindsight, in the light of a couple of decades of “hybrid” amps from major manufacturers that have used a single preamp tube in an otherwise all-solidstate circuit as a means of “adding real tube warmth” (read “giving the marketing department something to hype”), the Music Man circuit is “hybrid” done state-of-the-art, with the clear objectives of reliability and tonal integrity put front and center rather than marketing. It’s hard to argue with the veracity of a well-designed solidstate preamp circuit for clarity and headroom, and the output stage is where so much of the real tube-tone mojo happens anyway.

To generate such massive power, the HD-130 ran its 6CA7s at very high voltages, upward of 700 volts DC on the plates. The amp included a half-power switch that reduced output not by switching out two of the four tubes, but by reducing the B+ to drop the tubes’ efficiency.

As might be expected, the core tone of these things changes slightly depending on the full- or half-power setting, but either sounds big and firm, with thick cleans on tap when you want them. The Master Volume tends to be very usable for generating crunch, though it is by no means a high-gain amp. With the Master up full, it will also yield massive juicy breakup when pushed toward the max, once those 6CA7s finally start to clip a little, but few human beings on the planet are licensed to play at such volumes these days!

The HD-130’s forté, then, is exactly what Leo intended: bold cleans, plenty of body and clarity, and the ability to cut through just about anything onstage or in the mix.

While this tonal template still suited plenty of country, pop, and jazz guitarists circa 1977, it was no longer anything like what most heavier rockers were after. So while these Music Mans were very successful at chasing the Fender Twin Reverb, they perhaps should have been chasing the high-gain Marshall or Mesa/Boogie tone to make a greater impression on the emerging rock market.

Nevertheless, the HD-130 hit the market with at least a few prominent artists of the day; Mark Knopfler made the 212-HD 130 combo his main touring amp with Dire Straits for several years from the late ’70s, and Eric Clapton was also an endorsee. A popular Music Man ad from ’76 showed Clapton onstage in front of three towering HD-130 full stacks, wielding his Gibson Explorer with a smoldering cig wedged at the headstock, and the cover of the ’78 album, Backless, shows Clapton with Blackie warming up through a Music Man combo.

Otherwise, that a “vintage” amp favored by at least a few guitar-tone gods and produced to the successful design objective of the American guitar-amp god, can be had today for an easy three-figure sum is something of an anomaly. Owned by Marc McElroy, co-proprietor of the Electric Cave recording studio in Portsmouth, New Hampshire, our featured HD-130 Reverb is an extremely clean example, and displays why any guitarist today might want to take advantage of that pricing situation.

“This is one of the only vintage master-volume tube amps that produces a nice tone when setting it for a light distortion,” said McElroy. “Most are all or nothing. Also, the tremolo is very unique, and the reverb is not like a Fender- or Gibson-style reverb, it’s a bit more of an effect. If you set it right, it can make you feel like your head is on backward, which in some cases can be great for creating ambient guitar sounds.”

If you need it loud and proud, and are open-minded enough to go unabashedly “hybrid” in your quest for a Twin-killer, the HD-130 Reverb might just be your beast, and possibly for an extremely modest sum.