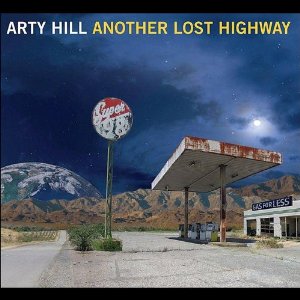 Good musicians just might outnumber good songwriters, but don’t tell Arty Hill. This album of 11 originals out of 12 cuts sports snappy country swing and blues numbers like the energetic “Mae Dawn” that prove that not only do they write ’em like they used to but folks like Hill do a darn good job of it.

In the old American Bandstand parlance, “It’s got a good beat and you can dance to it.” Between Hill’s guitar, the late Dave Giegerich on Dobro and lap steel, and guest pedal steelers Jonathan Gregg and Nathan Fleming on several cuts, it’s also a picker’s party. Gregg is the titular “King Of That Thing,” an ode to and a showcase for his prowess as a player and its effect on some female listeners.

Hill is an adept rockabilly/swing guitarist who can afford to share the spotlight with fellow players. He and Giegerich on Dobro pop like cap pistols on the up-tempo “Roll Me A Song.” The autobiographical title cut, a wistful semi-update of Hank Williams’ classic “Lost Highway,” is enhanced by guest Patrick McAvinue’s mournful ﬁddle and Giegerich’s evocative lap steel. And “Big Drops Of Trouble” is great fun marked by Hill’s inspired, clean, slightly overdriven rockabilly licks.

Smart, clean production and rhythmic, tuneful songs – like “12 Pack Morning,” distinguished by his interplay with Giegerich’s Dobro (and maybe being the only drinking song to quote the epic poet Homer); “Victoria’s Secret Is Safe With Me,” a song that would have be perfect for George Jones; and the touching Mexican-ﬂavored dance ballad “Breaking-Up Party” – make Another Lost Highway a sureﬁre winner.