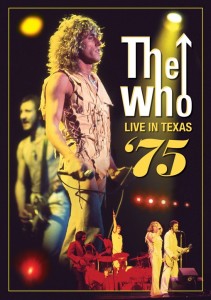 Eagle Rock Entertainment has set an October 9 release date for The Who Live In Texas ’75 on DVD. Filmed in Houston, the concert happened early in a massive U.S. tour in support of The Who By Numbers. With Dolby Digital Stereo sound, the 117-minute 25-song program —previously available only as a bootleg— has been restored by longtime Who collaborator Jon Astley. Songs include “My Generation,” the band’s cover of Eddie Cochran’s “Summertime Blues” as well as “Baba O’Riley” and “Won’t Get Fooled Again.”
The Guide