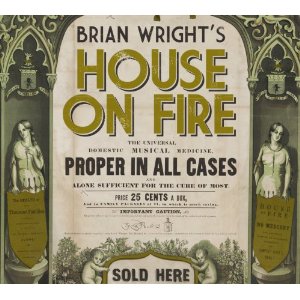 Off kilter, warped, but addictive, Brian Wright’s music grabs your attention. He describes it as, “…situated somewhere between Woody Guthrie and The Velvet Underground.” Where exactly, depends on the song.

Beyond writing the songs and singing lead vocals on House On Fire, Wright plays all instruments in the core band. Cameos by Michael Starr (dobro), James King (sax), Sally Jaye (vocals and accordion), and Rhona Bennett (vocals) add spice, but mostly, it’s Wright, whose music displays the diversity of his inﬂuences.

The opener, “Striking Matches,” is a cross between a talking blues and a patter song. The lyrics come fast and furious, focusing on the end of a relationship. The second tune, “Blind April,” has an opening lick played on a Fender VI with plenty of twang. Perhaps the most arresting track is “Accordion,” which couples an eerie opening lick with equal lyrics; its edge comes from the combination of modality and dark instrumental textures, which make for an archetypical divorce tune.