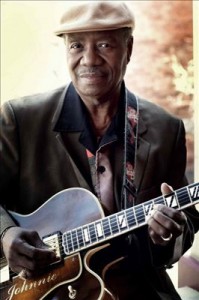 Johnnie Bassett, a veteran guitarist/singer/songwriter on the Detroit blues, jazz, soul, and R&B scenes, died August 4. He was 76 and had been battling cancer.

Born in Florida, Bassett’s family moved to Detroit in 1944. Taking up guitar, he joined a band that won local talent contests and backed notable artists including Big Joe Turner and Ruth Brown. In ’58, Bassett enlisted in the Army and upon his return, began working as a session musician for Fortune Records while continuing to play in local bands. For a short time he handled sessions for the Chicago-based Chess Records, where he played guitar on the first record by Smokey Robinson and the Miracles, 1958’s “Got a Job” In the ’60s, Bassett moved to Seattle, where he backed Tina Turner, Little Willie John, and others. By decade’s end, he moved back to Detroit and resumed his playing career. In the early ’90s he formed and began fronting the Blues Insurgents. In ’94, the Detroit Blues Society honored Bassett with a lifetime achievement award. The Blues Insurgents’ 1998 album, Cadillac Blues, was nominated for five W.C. Handy Awards. In ’06, the Detroit Music Awards  named him Outstanding Blues/R&B Instrumentalist, and in 2010 and ’11, the organization named Bassett and the band Outstanding Blues Artist/Group.