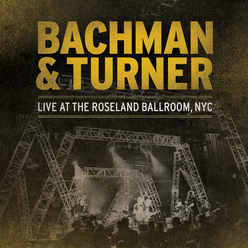 Bachman & Turner  will release a 2-CD collection, Live at the Roseland Ballroom, NYC, May 29. Bachman & Turner is Randy Bachman and Fred Turner, the musicians at the heart of legendary band Bachman-Turner Overdrive. Live at the Roseland Ballroom, NYC includes songs from their recent self-titled album along with their rock n’ roll anthems including “You Ain’t Seen Nothing Yet” “Takin’ Care Of Business” “Hey You” “Blue Collar” “Roll On Down The Highway” “Let It Ride” and “Lookin’ Out For #1” plus a hit-laden throwback to Bachman’s early days with The Guess Who including their take on Johnny Kidd’s “Shakin’ All Over” and the band’s US No.1 hit “American Woman.” The show was also filmed and will be released on DVD and Blu-ray later in the year.