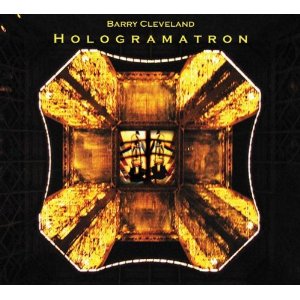 Barry Cleveland takes his music to another dimension with Hologramatron. It’s like a cross between the Velvet Underground and Portishead, but completely unique – and uniquely eccentric.

Cleveland’s compositions, arrangements, and guitar work here are a fusion of fusions, as he masterfully treads into ambient, avant-garde metal, psychedelia – even protest music. And the layers of sonic energy that emerge are wondrous.

Cleveland is a diehard gearhead, and ably works with a range of equipment. His main guitar is a PRS Custom 24 Brazilian run into a Rivera Venus 6 amp through a Palmer ADIG-LB speaker setup. And he likes pedals – lots of pedals. His go-tos include a Euthymia ICBM Fuzz, S.I.B. Echodrive delay, and MoogerFooger MuRF.

On several tracks, such as “You’ll Just Have to See It to Believe” and “Stars of Sayulita,” he used a prototype Moog guitar, crafting mysterious sound colors.