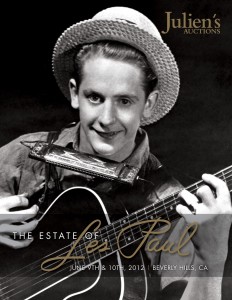 On June 8-9, the estate of musician, engineer, and inventor Les Paul will sell at auction some of the equipment, memorabilia, personal effects, and instruments Paul used throughout his career. Among the items will be a 1968 Gibson Les Paul Custom Recording Model prototype, a ’51 Fender “nocaster,” a ’27 Gibson L-5, ’52 Gibson Les Paul, an API recording console, an early-’70s Ampex MM1000, and Paul’s Gibson LP-1 amplifier.

Paul is lauded in the guitar community for helping popularize Gibson’s first solidbody electric, which he helped design, then endorsed.  He is also noted for his contributions as a performer and recording artist, and is an inductee to the National Inventors Hall of Fame, the National Association of Broadcasters Hall of Fame, and holds the Grammy Trusteed Award. He received three Grammys, for Best Country Instrumental, Chester And Lester  in 1976, Best Rock Instrumental, 69 Freedom Special in 2005, and Best Pop Instrumental, Caravan, in 2005. For more, go to juliensauctions.com.