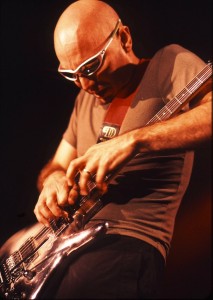 Joe Satriani announces the release of the live-concert film, Satchurated: Live in Montreal, on April 24.  The film by Pierre & François Lemoureaux will be available on 3D Blu-ray and standard definition DVD on the same date.

Satchurated was filmed live during Satriani’s “The Wormhole Tour”, supporting his studio album Black Swans and Wormhole Wizards, at the Metropolis in Montreal, Canada. The December 12, 2010 concert was filmed by GRAMMY and EMMY award-winning concert filmmakers Pierre and Francois Lamoureux. Satchurated: Live in Montreal was recently released for a limited engagement on March 1, 2012 to select theatres throughout the country, with a command showing on March 8, 2012.

With a total of ten cameras working to capture the sold-out concert, Satriani’s musical best was recorded in both 2D and 3D HD formats. The high-definition filming makes Satriani’s play as much a pleasure to watch as it is to hear. Every chord change is captured and presented as if one were experiencing a living room concert of your very own! Fans of “Satch” will be eagerly awaiting the film’s worldwide release in March 2012 with theatrical presentations in both formats, followed by a shorter version for television broadcast.

This year, Steve Vai & Steve Lukather will join Satriani to revive his “G3” Tour ‘down-under’ for a Spring tour of Australia & New Zealand.

Vai Adds Dates in Support of “The Story of Light”