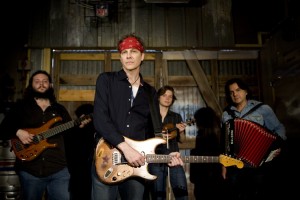 The BoDeans – Kurt Neumann (Vocals and Electric Guitar), Michael Ramos (Keyboards, Accordion, and, Backing Vocals), Noah Levy (Drums), Warren Hood (Violin/Fiddle), Ryan Bowman (Bass), Jake Owen (Acoustic and Electric Guitars) – will release a new album, American Made, on June 12. While the album finds the group embracing their heartland roots, they’ll embark on the next chapter of their storied career in April with a new lineup and a national tour.

“‘Roots rock’ was a label I fought when I was younger,” says BoDeans founder, primary writer and frontman Kurt Neumann, “but I came to realize that if by “roots” you mean blues, rock, country and soul all slammed together into one sound, then yes

On American Made, Neumann channels these classic American sounds to express his vision of the American spirit. In addition to 11 original songs, the album also features a deeply felt cover of Bruce Springsteen’s “I’m on Fire.”