Marketed before Steinberger headless instruments or the Kramer Duke series (VG, August ’04), the early-’70s Bunker Pro-Bass was radical for its time – even if it wasn’t all that radical for musician/inventor Dave Bunker.

In fact, if you were familiar with Bunker’s work in the ’60s, the Pro-Bass wasn’t even all that unusual. Known for his doubleneck Touch Guitar and the two-handed tapping method by which it is played, Bunker (VG, August ’06) filed for a patent on a headless guitar in March, 1965, and was granted the patent in May of ’66. The design conformed to what became the ProStar series, and its origins were gender-specific.

“I had an all-girl band that played in Las Vegas, and I was trying to cut weight from the body for the instruments they’d use,” Bunker recently told VG. “I wanted the guitars to be petite and easy for the girls to tune… and thought it would be easier if the tuners were on the body.”

The ProStar guitars and Pro-Bass were equipped with Bunker’s patented “floating” neck, which utilized a 3/8″ steel bar acting as a cantilever for both ends, and the rod weighed about eight ounces more than a standard single truss rod, Bunker recalls. The neck attached to the body using a screw-and-dowel assembly, and the removable Gumby-shaped headstock was “…strictly for show,” according to Bunker. The ball-end of the strings anchored in a large bracket at the end of the neck, and per the era, both used a brass nut. Both guitar and bass were 24-fret instruments, maple fretboards were standard, and the inlays were unusual; on the first octave, Bunker used black dots with white centers (which he described as “plastic inside of plastic”), while the 12th fret was marked with an additional set of smaller solid-black dots, followed by smaller markers on the 15th, 17th, 19th, and 21st frets. The 24th fret was adorned with four small black dots. The Pro-Bass shown here is likely an early example, with a scale length of 30.5″. In its brief life, the Pro series was made up primarily of 32″-scale basses. The matching guitars had a 25.5″ scale.

The Pro’s body silhouette was designed with ergonomics and balance in mind. Bunker knew full well that a body with tuners mounted on it was going to look odd in the eyes of some, so he added small cutaway horns in deference to tradition.

The instruments were usually all-maple construction, though walnut bodies – as well as laminated bodies made from both woods – were also offered. Hardware included a massive Bunker-designed brass bridge (check out the length of travel for each saddle!), and Bunker recalls using Grover tuners on ProStars early on, then later switching to Sperzels. The input jack was mounted on the edge of the body, near the G-string tuning key.

The pickup on this example is a DiMarzio, and the mini-toggle switch is a coil tap, while the two knobs adjust the guitar’s Volume and Tone output. There was also a two-pickup version of the Pro-Bass. 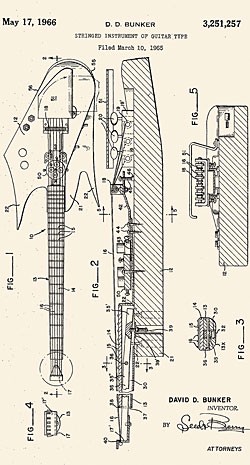 Now in his 70s, Bunker has been involved in other stringed-instrument ventures, such as the PBC line (made in the early/mid ’90s), and has developed other noteworthy – and by comparison, downright traditional – innovations for guitars and basses. One is the Electro-Mute, an electric string mute on the Touch Guitars that Bunker still makes. The system dampens individual strings, and according to his website “…enables the strings to be off at all times, which eliminates all hum, hiss and other noises.”

While his reputation for crafting odd designs was forged with the Touch Guitar, initial reaction to the ProStar series was both more pronounced and more positive. However, history has shown many times that things on the “cutting-edge” are also often the first to hit a brick wall. So it was for the ProStars, which foundered in the marketplace. Nonetheless, interest in the ProStar bass has recently surged, and he is planning a reissue!

This article originally appeared in VG‘s July 2009 issue. All copyrights are by the author and Vintage Guitar magazine. Unauthorized replication or use is strictly prohibited.