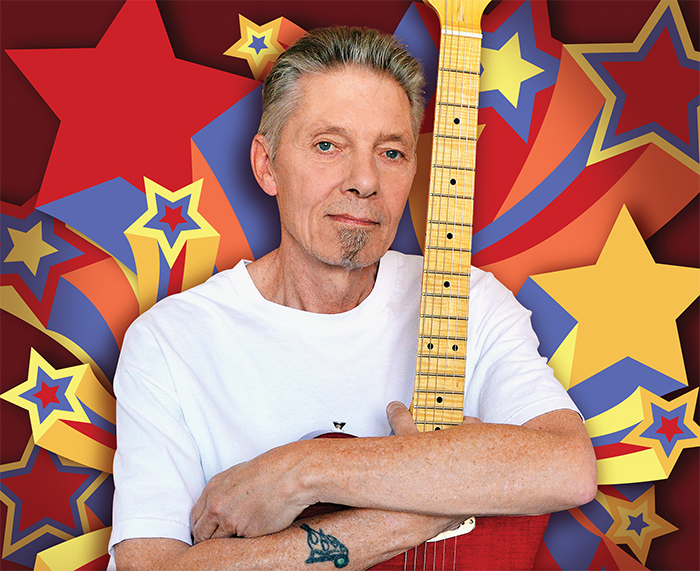 What was it like being a session cat in the early ’70s?
Back in those days, there was something called The Manhattan Guitar Club. It was Vinnie Bell and three or four guys who did session work, including all the jingle work. There was an Ampeg Reverberocket, ReverboJet, or Gemini in every studio. Instead of an on/off switch, there was a key. Second engineers had the keys. In New York you don’t schlep an amp around in a taxi cab, so these guys would show up and the second engineer would unlock the amp. If you weren’t a member of The Manhattan Guitar Club, you’d have to slip the second engineer a joint. He’d unlock the amp, and you’d do the session. Those amps sounded fantastic.

Did you bring your own effects?
Everybody used a guitar chord. That was the effect back then. The only guy who had effects was Vinnie Bell, who invented the Coral Electric Sitar. He had a wah pedal that was really amazing, and a delay, which was incredible. He did all the jingle dates when they wanted an unusual guitar sound.

Which guitars were you using?
Mostly a Gibson ES-345 and an early-’60s Strat that I proceeded to butcher; if I had any of the guitars I owned in the early ’70s, I’d be retired and wealthy at this point (laughs). But, I would decide that the neck was too big, so I’d sand it down until I exposed the truss rod, or hack at the pickup cavity with a chisel until it got big enough for a humbucker. I destroyed a succession of Strats.

How did you come to play on Stevie Wonder’s “Superwoman?”
I was living in a commune with a woman named Claire Maurice. She was a organic vegetarian chef who cooked for Stevie Wonder and Jimi Hendrix. She brought food to the studio, which was on 8th Street in New York. Robert Margouleff and Malcolm Cecil were producing Music Of My Mind. Stevie was the only musician on the record, and Claire told him, “I know this guy who plays guitar for the Butterfield Blues Band. Why don’t you check him out?” So, I got a call saying, “Get your ass down here, they want to hear you play!” Stevie put on “Superwoman” and said, “What would you play over this?” I started playing, and my first pass ended up on the record.

What guitar did you use on that?
A black ’64 Strat.

Coming up with great ideas so fast must have given you a lot of studio cred.
It helped a lot, but I had some allies. My main ally was Al Kooper. He was a fan of my playing as well as Bobby Colomby who was the drummer for Blood, Sweat & Tears. They’d recommend me for all kinds of session work, which is how I got the gig with Bob Dylan on New Morning. Al Kooper also recommended me for a gig with The Rascals. I had these awesome advocates that didn’t want anything in return. Al is a fantastic musician and he liked guitar players. He’s still turning people on to stuff in the most generous way. There’s not a lot of people like that, and I’m incredibly grateful to him for launching my career.

You still had to audition for Boz Scaggs, George Benson, Aretha Franklin, and people of that stature.
I had to audition for everything. When I moved to Los Angeles and started working with people like Lee Ritenour, Michael Landau, Robben Ford, and Steve Lukather, those guys scared me to death. When I was in New York, I had it pretty sewed up – there wasn’t a lot of competition for what I did. When I got to L.A., Landau and Lukather were about 18 years old. They were playing with Boz Scaggs and just tearing it up! They could play anything! I realized that if I didn’t start paying attention, those guys were going to take my gigs.

I started studying what they were doing and re-thinking my playing. I tried to learn more and fill in some of the gaps that I felt were deficiencies – which were numerous. I couldn’t play very well over changes. The other thing was that those guys were flawlessly in tune. I started working on my tuning, making sure that my gear sounded good, and making sure I was prepared. Those guys took it really seriously, and I realized I needed to.

They also had overdrive sounds to kill for. I wasn’t really that focused on it – I just turned up the amp. When I realized those guys were using pedals to get sounds, I started experimenting. I basically just wanted to keep my job (laughs).

You’re a blues-based player. When did you morph into jazz?
My background with [keyboardist/composer] Neil Larsen exposed me to a lot of music. The musicians in the Butterfield Blues Band were all jazz players and they exposed me to a lot of music I would not have otherwise learned. Neil would show me “Freedom Jazz Dance” or “Round Midnight,” and that started to open my head to the idea of chords, and how to play over changes and sophisticated chord voicings. Then I could do a gig with Al Jarreau; I could finally read the chart, understand it, and play it. I was a terrible reader, but I had really good ears; I could hear stuff and I’d fake it. If they wanted a reader, they’d call Dean Parks. If they wanted an improviser, they’d call me.

Unfortunately, I was labeled a fusion player, and it stuck with me for years. I couldn’t break away from that even though my background was in blues, funk, and R&B. I listened to a lot of James Brown and Motown players. I got a [reputation] as being a fusion player and I couldn’t shake it. I kept getting dates with people like Joe Sample, Tom Scott, and Al Jarreau. It also led to gigs with people like Rickie Lee Jones and doing interesting s**t. It opened a lot of doors to some fantastic music.

You and Neil Larsen were playing pop-fusion with Full Moon. When you abandoned that style, bands like Spyro Gyra imitated Full Moon and ushered in smooth jazz.
There ya’ go (laughs). Neil Larsen should be more pissed off than I am. Those were all pretty much Neil’s songs. My songs were always kind of pop-ish or R&B-based. Neil is really the one who invented that style. He was writing these beautiful songs with deep changes and great grooves. He’s one of the most badass writers in that idiom.

He should receive the credit for inventing that genre. It got watered down, diluted, and turned into something horrible. It started out as high-energy, exploratory, adventurous music. It was no-holds-barred. It wasn’t elevator music.

Jeff Lorber, Tom Scott, and The L.A. Express, and all that s**t, were way after us; we had a cult following back in ’71. We never broke through, but we had a hit in the early ’80s with “Who Will Be The Fool Tonight” with a reincarnated Full Moon.

What was the concept behind The Whirlies?
The Whirlies was a labor of love from the early ’90s. I’m really proud of that record. I had a clear vision and I found a singer, Todd Taylor, who sounded fantastic. I was a huge fan of John Hiatt during that period. I wrote all these vocal songs – I assumed the persona of a guy I imagined would be writing these songs, and singing in that genre. It was so effortless to write because I knew who I was channeling. I knew what that guy would say.

I had more commercial success with The Whirlies than anything else. Those songs have been on a couple of HBO specials and “The Young and The Restless.” “Wait” and “Fire In The House Of Love” were licensed all over the place. I’m really proud of those songs.

Do you listen to contemporary music?
The music I enjoy the most is hip-hop. That’s where the most creativity and risk taking is going on. I don’t mean fake, watered down hip-hop; I mean stuff like Sage To Gemini. 50 Cent is a bad motherf***er. I love Nelly. There’s a song called “Turn Down For What” that uses every production trick in the book and throws it all into one song. It’s a piece of art. There’s all kinds s**t going on in that music.

It’s more creative than recycling classic rock.
I can’t hang with sensitive singer/songwriters or guys in skinny jeans with high voices. There’s something about it that’s just not for me. I love all kinds of stuff when it comes to music. Anybody that’s throwing down in any genre, it doesn’t matter if it’s country or jazz, or hip-hop, or R&B. If it’s throwing down and somebody is out there on the edge, I like it.

How about guitarists?
They’re all f***ing great; Robben, Larry (Carlton), and of course, Steve Vai is a motherf***er. Everybody brings something to the table. Joe Bonamassa’s great. I like a lot of them, but I’m an egomaniac. I still like myself the best (laughs). Any guitar player who says anything different is lying out their ass. It has to be that way. If you don’t like yourself the best, get another job.

I’m the most competitive motherf***er in the world. If you show me a good guitar player, I wanna kill him. I wanna stick my guitar up their ass. The whole idea of “best” is ridiculous. As far as I’m concerned, James Brown’s guitar player is the best. There’s nobody else that could play that simple, that great, and in the pocket. I could fake what he does, but he couldn’t play one note of what I play harmonically, but who cares (laughs)? Does that make me better? Not for James Brown.

Has having played guitar on so many iconic albums given you a unique perspective as a guitar builder.
I didn’t sit down one day and decide to design the perfect guitar. Over the years, I found different aspects of the guitar that really worked for me. I always tell people that a Buzz Feiten guitar might not be for you. But if you have the same issues with guitars that I do, it might work. It has to have great tone, acoustically, before you plug it in. If it doesn’t sound great acoustically, I don’t want it. I want to be able to sit with no amp and enjoy it. Then there’s a whole list of things that go along with that criteria. Feiten guitars are the result of my experiences. It’s not the result of an opinion or a theory. They work in the heat of battle. They work on the stage and in the studio. They sound good, acoustically, sound better plugged in, play in tune, have great sustain, great tone, and inspire me to play.

That’s the overriding concern with me in designing guitars. They have to be inspiring. It has to give you something back when you play it, and not throw up a bunch of obstacles. There’s a double-cutaway in the works, different pickup, and scale length configurations, and some interesting stuff coming up. Stay tuned.