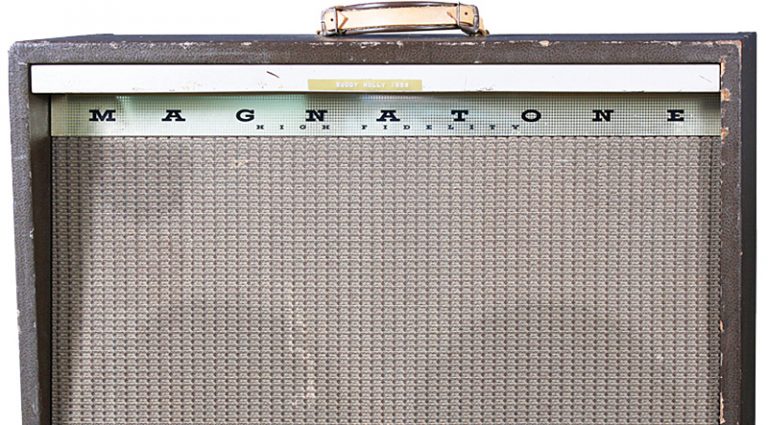 When guitarists talk tremolo or vibrato, you can bet the magnificent Magnatone amps will find their way into the conversation. The watery, warbling “true vibrato” that the larger Magnatones are capable of producing is never forgotten by players fortunate enough to have experienced it.

In searching to expand the Magnatone legend, the subject is likely to come around to artists who used these amps, and the pool is surprisingly small. Some might mention Lonnie Mack’s formative work, which deserves credit even if a relatively small percentage of the listening public has heard his playing. And we have to stop in on Bo Diddley, who certainly moved through countless amps over the years but undoubtedly used some Magnatones early on. But inevitably, we turn to the more populist Buddy Holly, who, following a range of Fender tweed amps, became a notable fan of Magnatone. So how cool is it to have the opportunity to check out Buddy Holly’s very own ’58 Magnatone Custom 280? Unfathomably cool, one might propose!

And how do we know this was Buddy Holly’s own amp? Well, because Buddy told us so – by sticking his name and the date of acquisition right there on the front in gold Dymo lettering tape, and by signing and dating the inside of the cabinet! That, and because Gruhn Guitars, which recently sold this amp, has Holly’s ownership thoroughly documented. Oh, and of course it was displayed at the Rock and Roll Hall of Fame for a time and has been authenticated by the curator of that museum.

Readers will likely note the surprisingly good condition of this amp, and be interested to learn that it was Holly’s “home amp,” kept in the apartment that he and wife, Maria Elena Holly, shared in New York City after being purchased from Manny’s there in the city in September, 1958, just half a year before his death in February of ’59. It was used to record several vibrato-heavy demos (notably “Peggy Sue Got Married”), and even the scratch tracks for many of his final studio cuts, while another amp was taken out on the road. No studio recordings of this amp were released before his death, but original takes featuring the Magnatone were uncovered for the mixes of posthumous releases such as “Love Is Strange,” “Smokey Joe’s Café,” and “Slippin’ And Slidin’” from MCA’s The Complete Buddy Holly.

A letter written by Holly’s sister, Patricia Holley Kaiter (“Buddy’s” birth name was Charles Hardin Holley, with the extra “e”), and provided with the recent sale of the amp, indicates that she “sold the Magnatone Custom 280 ‘Stereo Vibrato’ amplifier to Emmylou Harris on November 8, 1988…” to be given as a birthday gift to Paul Kennerly, Harris’ husband at the time. Rather oddly, the letter goes on to say that the amp “is one that Buddy used in his earlier years” and had been in the Holley family until that time. Holly used Fender amps earlier in his career, and the Magnatone clearly dates from ’58, so this might merely be some confusion on her part, or a trick played on the memory by the haze of 30 years. Either way, this is one incomparable slice of rock-and-roll history, though even your bog-standard, no-name-ownership Magnatone Custom 280 is a pretty rare amp, and an acquisition worth cooing over.

Capable not only of producing true vibrato, the Custom 280, as the late rocker’s sister informs us, is a stereo amp, too. With the effect running on full, the vibrato’s pulses and warbles alternate between each of the amp’s two 12″ speakers (each of which is paired with a 5″ tweeter) to create an eerie, spatial soundscape that is truly hypnotic. The Magnatone company dubbed this girthsome sound “Vibrato Vastness,” as signaled by the two gold “V” letters in the lower right corner of the speaker grille. In addition to this tidbit, a ’57 catalog also boasts “The ultimate in modern amplifiers – the Custom 280 has a sound Big As All Outdoors – the Vastness of the sky combined with Magnatone’s Big “V” Electronic True Vibrato…” and so on. To achieve said vastness, the 280 routes its preamp to a stereo vibrato circuit that feeds two independent output stages, consisting of two pairs of 6973 output tubes hitched to two output transformers. We see these 6973s mainly in Valco-made amplifiers – the Supro Model 24 and Gretsch 6156 Playboy among them – and they can be great-sounding tubes. Partnered with rather small OTs for the task, however, they figure as part of what many players object to in the Magnatone design; for their size, weight, and swirly potential, these amps come off as a little under-powered. Which is to say, they sound phenomenal, but would be mindblowing with a little more punch, headroom, and fidelity. The P12P speakers used, for this example at least, are also among Jensen’s less-efficient designs, and even a P12N would throw it all at you with a little more gusto.

That said, it doesn’t seem Magnatone was trying to cut corners, as these are extremely well-made amps in other regards, crafted with apparent pride by Magna Electronics Inc. in Inglewood, California. They required a full 12 tubes to achieve their vibrato-in-stereo sound, along with a complex web of circuitry. Put it all together, and it was going to cost you $395, according to a late-’57 Magnatone catalog – a pretty penny considering Fender’s top models at the time, the narrow-panel tweed Bassman and Twin, sold for $339.

With Holly’s recorded examples of Custom 280 goodness being so thin on the ground, it behooves us to turn back to our “other Magnatone artists.” Lonnie Mack’s first hit, the instrumental rendition of “Memphis,” gets its vibrato more from the Bigsby on his ’58 Flying V, but the followup, “Wham,” swims in this amp’s swift swirl, sounding much like a Leslie rotating speaker cab. You can also hear it clearly on cuts like “The Bounce” and his cover of “Suzie Q,” and plenty of others. And while Bo Diddley’s amps aren’t always clearly documented, you can hear what you’d swear was that Magnatone warble (from one of the larger models or another) all over much of his work from the late ’50s and into the mid ’60s. As dramatic as the Custom 280’s stereo vibe undoubtedly is, however, it is, ultimately, perhaps a little too fussy for many players to use consistently. Impressive in small doses, it can become entirely sea-sickening if overused, and, ultimately, that is probably why this “innovation in the world of music” didn’t take over the planet.