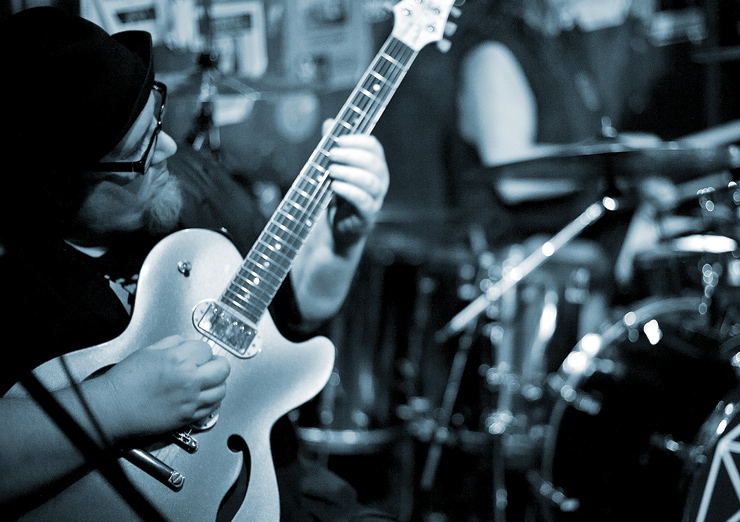 John Ziegler’s band, Volto!, emerged from L.A.’s fusion scene with bassist Lance Morrison and drummer Danny Carey, who’s primary gig is with Tool. After cutting its teeth playing ZZ Top and Allman Brothers covers, Ziegler began to write songs, motivated by Carey’s playing. “He’s such a stylized drummer,” said Ziegler. “The originals kind of squirted out and we honed them in front of crowds.”

Volto!’s album, Incitare, is a retro-fusion feast with an emphasis on accessibility. “Take people who don’t play music and show them Allan Holdsworth, and they go, ‘Okay…’ But my music is stone-cold simple.”

Volto! has a stronger rock influence than most contemporary fusion bands…
The biggest compliment is when somebody who doesn’t play music can like your music. We just did a tour and people were saying, “I’ve never seen anything like this!” The songs are simple – Billy Cobham, Tony Williams, Jeff Beck. I want to be a modern version of that.

Talk about your effects.
Over the years, I’ve collected zillions of pedals; I have a Roland Space Echo and the Spring Reverb. I make a concerted effort to keep it all analog.

Did you record delays live?
Yeah. We put two mics in front of my 1×12 Bogner cabinet and added a teeny bit of tape flange at the beginning of “Grip It.” That’s the only after-effect on the record. I didn’t play super loud, and I used my Bogner Überschall. And I don’t turn my guitar up all the way; when I play my Robin guitars, the Volume is set around five or six. I turn up for solos.

What’s on the solo to “Tocino?”
I hit the Hyper Fuzz and the Octaver. I’m not much of a multi-pedal guy. I usually only use one pedal at a time. I just happened to hit those two in the solo. It got a weird synth-type sound.

How did you get started on the guitar?
I didn’t start playing guitar until I was 21. I was into sports and studied mechanical engineering at Texas A&M. I bought a Les Paul from a guy in my dorm, stopped playing sports, and turned to guitar. Within six months, I was jamming. That guitar changed my life; I quit school, studied music, and became a musician.

What’s next for the band?
We want to play for people who haven’t see us before. And, we’ll do another record; I’d like to do an album a year. I have dreams of playing the jam band circuit with Derek Trucks, Warren Haynes, Joe Bonamassa, and Phish. We’re heavier than those bands, but that crowd will get what we’re doing. The big thing is schedules; Danny has [the gig] with Tool and Lance plays with Don Henley and Mike Campbell.