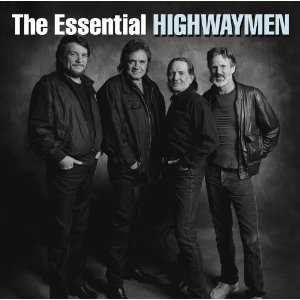 The first group of Highwaymen was a folk ensemble that flourished in the early ’60s. The Highwaymen of this release were a Traveling-Wilburys-type aggregate of four of country music’s biggest stars and songwriters – Waylon Jennings, Johnny Cash, Willie Nelson, and Kris Kristofferson. They released three studio albums as a group but had already been performing and jamming together in various combinations before the first album and would continue to do so until Jennings’ death in ’02. This collection puts together live cuts and most of their studio output as duos, trios, quartet and solo with the bonus addition of singer Johnny Rodriguez (“Deportee”) and a Who’s Who of guitarists including Grady Martin, Reggie Young, Chips Moman, Jack Clement, Norman Blake, and Marty Stuart. Kristofferson’s compositions dominate the collection with his own version of “Me And Bobby McGee” resurrecting the song’s gentle poignancy. Cash and the Tennessee Three’s live performance of “Sunday Morning Comin’ Down” is
close to iconic, sounding just as good as it did when it was recorded in 1970. Nelson’s 1978 solo take on “Help Me Make It Through The Night,” featuring Jody Payne’s gorgeous solo, rivals the classic version by Payne’s late wife, Sammi Smith.

Some of the best cuts date back to their first album as a quartet, including a cover of the Jimmy Webb song that gave the group their name, and a rollicking version of Cash’s “Big River” that Jennings practically steals.

The Essential Highwaymen will lead many to seek out the original albums. For Jennings, it’s also a posthumous chance to be reevaluated as a talent worthy of standing shoulder-toshoulder with the best of them – his fellow Highwaymen, to mention a few.