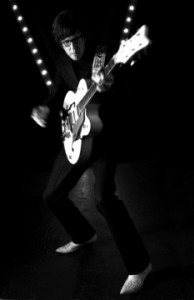 Sugar Hill Records is set to release V, the solo debut from Nashville guitarist Kenny Vaughan, on September 13. Vaughan has been a member of Marty Stuart’s Fabulous Superlatives since 2001, and in 2006 he was recognized as Instrumentalist of the Year by the Americana Music Association.

“As V so aptly demonstrates, Kenny is no slouch as a frontman, either,” says Sugar Hill. “His songs and singing are charmingly conversational, with no shortage ofhooks and clever verbal volleys. His cohorts in the Fabulous Superlatives (including Stuart on guitar and mandolin) offer road-tightened support that is honest and heartfelt.” Learn more at sugarhillrecords.com.