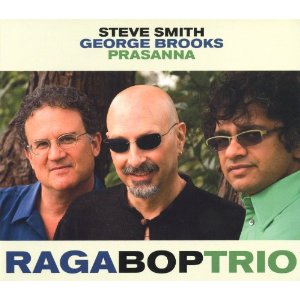 Before joining Journey in 1978, Steve Smith drummed on jazz violinist Jean-Luc Ponty’s Enigmatic Ocean, and before he left the band in ’83, he had already formed the fusion group Vital Information.

The angular, hyper opener, “Tug Of War,” begins as a guitar/drum duo before Brooks’ alto doubles Prasanna’s melody. The sax lays out for an impressive guitar solo using sitar-like slides, jazz chords, and plenty of speed. Brooks’ “Miss Oma,” in the vein of a lilting Sonny Rollins calypso, is highlighted by Prasanna’s solo bursts that combine blues, Indian, and a touch of Hendrix. On “Love And Hunger,” Prasanna alternates between a droning arpeggio vamp and very capable jazz comping, making the absence of a bassist virtually unnoticeable. On “Ironically,” Smith even gets into some “konnakol” (vocal percussion), punctuated by staccato chords from Prasanna. “Dubai Dance” contains the guitarist’s bluesiest playing, squeezing some Clapton-esque bends from his Paul Reed Smith before a flurry of chords and descending pull-offs.

The album was recorded live in the studio in four days, only three months after the group’s first rehearsal – testament to the formidable talents of all three players. Their sound is fresh and new and likely to please, whether you’re coming from a jazz, rock, or classical bent – East or West.