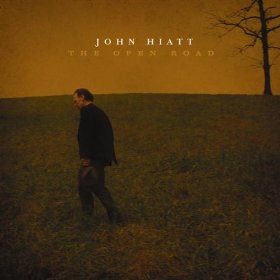 Hiatt is nothing if not prolific – not only releasing approximately 20 albums in 36 years, but writing virtually every song they included.

There’ve been some twists and turns and ups and downs – from the ’80s gloss of All Of A Sudden to the benchmark Bring The Family and its rootsy follow-up, Slow Turning, to the acoustic Crossing Muddy Waters.

The Open Road finds him fronting a quartet – the context in which he seems most comfortable (be it Ry Cooder, Nick Lowe, and Jim Keltner or the Goners – Sonny Landreth, David Ranson, and Kenneth Blevins). The same lineup as 2008’s Same Old Man is onboard – Hiatt’s guitar, Blevins’ drums, Patrick O’Hearn’s bass – but with North Mississippi Allstar Luther Dickinson’s lead guitar replaced by Doug Lancio. O’Hearn is best known for his work with Frank Zappa, while Lancio’s credits include Patty Griffin, Matthew Ryan, Nanci Griffith, and others. It’s an eclectic aggregation befitting Hiatt’s blend of country, R&B, rock, folk, blues, and gospel.

When Hiatt’s on, it’s difficult to rate one album over another – the quality is so consistently high. For instance, Bring The Family is widely accepted as his masterwork, but each of Slow Turning’s songs is a stick-in-your-head hit.

There may be nothing as melodic here as “Slow Turning” and no riffs as memorable as “Paper Thin,” but the material is still strong. And “Homeland,” about Native Americans, is as emotionally resonant as anything Hiatt has written (“And I claim this land I own/But it belongs to another people/They possess it in their bones”).

Lancio opts for Duane Eddy twang over its galloping rhythm, while “My Baby” and the blues “Like A Freight Train” feature his understated slide. Throughout, the quartet shows why there’s no need for ancillary guests, background singers, or sweetening of any kind. They play everything that’s necessary and add a little extra – just the right feel.