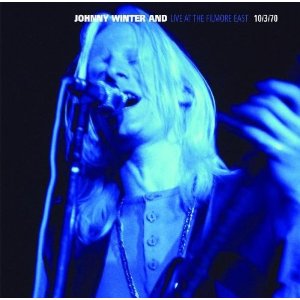 If a 22-minute slow blues strikes you as self-indulgent (which there’s no denying it is 90 percent of the time), you have to transport yourself back to the dawn of the Guitar Hero, ushered in by Winter, Clapton, Hendrix, et. al. – when faster, longer, and “more notey” were better. The albino from Texas delivered on all counts, along with the blues-roots credentials to back up the flash.

In no time, the guitarist went from playing Houston bars to a Columbia contract and the stages of Woodstock and both Fillmores. His self-titled, majorlabel debut – recorded with his original rhythm section (bassist Tommy Shannon and drummer John Turner), like the bare-boned, locally released Progressive Blues Experiment that preceded it – was a blues masterpiece. Second Winter (from late ’69) added little brother Edgar Winter on keyboards and saxophone and showed that Johnny could venture outside the genre, with the band’s versatility up to the task.

But in 1970, at the urging of his manager, Winter sacked the group and formed Johnny Winter And. Rick Derringer provided fresh material and a guitarist who could push Winter – not that he’d been holding much back prior. Interestingly, though, five of the seven songs in this hour-plus set pre-dated the band’s eponymous album, with the slide tour de force “Highway 61 Revisited,” from Second Winter, the clear highlight. Winter and Derringer mix things up on “Good Morning Little Schoolgirl” and an extended “Mean Town Blues.”

The liner notes quote a New York Times review that felt the new lineup was “a considerable improvement” over the original band. That’s debatable, but this find is an exciting freeze-frame in the careers of two guitar greats.

Graham Parker – Songs of No Consequence