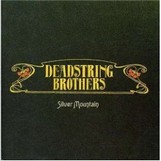 The Deadstring Brothers hail from Detroit and bring a mix of crunchy rock and roll and rootsy country – think Rolling Stones. Cuts like “Ain’t No Hidin’ Love,” and “Queen of the Scene” are stompers in the best sense of the word. Their command of rock, country, as well as R&B mixes wonderfully on cuts like “If You Want Me To,” where guitars meld incredibly well and the slide of Spencer Cullum dominates. That happens on several songs, including “Some Kind of User.”

Proving the Brothers are as comfortable playing acoustic music, the record wraps up with “The Light Shines Within,” a mix of acoustic (featuring Cullum’s slide) and jangly electric guitars that form the song’s backbone.

While the players are more than up to the task, the vocal tandem of Masha Marjieh and Kurt Marsehke are like a tag team of Mick Jagger and Tina Turner. Both are soulful and brash while bringing to mind the music we grew up with in the ’70s.

The Deadstring Brothers reference a lot of old music, but the beauty of Silver Mountain is they never push their own personality out of the way.


This article originally appeared in VG‘s February ’08 issue. All copyrights are by the author and Vintage Guitar magazine. Unauthorized replication or use is strictly prohibited.