Home Music Toots and the Maytals – Light Your Light 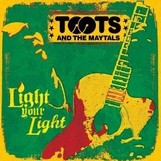 News flash: Toots is sporting dreads! Since the dawn of his career in the mid 1960s, Frederick “Toots” Hibbert has sworn by a close-shaven head. And his music has remained close to its ska and reggae roots, rather than the mystical, hard-core Rastafarian world of the natty dread master, Bob Marley.

And on Light Your Light, Toots goes back to his roots and back in the spotlight with a fine blend of revisited Toots’ reggae classics, R&B, gospel, and even a ska instrumental.

The show opens with a reworking of Toots’ 1970s-era bit of braggadocio, “Johnny Coolman.” Derek Trucks slips in his slide guitar here, but wisely plays a side role. Yet still at times – as in the outro solo – this makes for an uncomfortable concoction of Southern Rock reggae. Bonnie Raitt re-joins Toots for “Premature,” another reborn tune. And while her slide guitar fits the groove better, her singing, without that “Ja” accent, simply sounds flat in reggae. After the guest cameos are done, the album is all Toots and gets good. His reggaefied version of Ray Charles’ “I Gotta Woman” hits all the right notes while his cover of Otis Redding’s “Pain In My Heart” is glorious. Both pay homage to Toots’ R&B heroes.

“Tribute to Coxson/Guns of Navarone” is in honor of the old-time Jamaican record producers, from Byron Lee and Duke Reid to Studio One’s Sir Coxson Dodd. It’s ska reborn with rollicking sound-system joy. The dub then segues into a revival of the Skatalites’ cover of Dimitri Tiomkin’s 1960s action-film theme.

Tunes like “Celia” and “Image Get A Lick” are alive with a reggae vibe and sunny energy akin to many of the old 1970s Maytals numbers.

Despite all, however, the highpoint of the album is the closer, “Light U Light.” You can hear the gospel roots in much of Toots’ singing, yet it shines clear and bright here. With a soulful reminder of one of his greatest songs, “Pomps and Pride,” this is truly Toots at his best.


This article originally appeared in VG‘s January ’08 issue. All copyrights are by the author and Vintage Guitar magazine. Unauthorized replication or use is strictly prohibited.