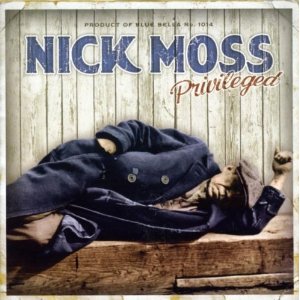 Along with the Kilborn Alley Blues Band, Gerry Hundt, and others on his Blue Bella label, Nick Moss is one of the most consistent current blues/blues-influenced artists from Chicago.

Moss’ music is not always strict blues; there’s a lot of P-Funk, Robin Trower, and Cream in the mix. Moss serves up a smoking version of Cream’s “Politician” (a thematic companion to “Born Leader”) along with a George-Clinton-inspired/heavy-on-the-wah take on Buffalo Springfield’s “For What It’s Worth” to go along with more traditional fare like a high-energy reading of Howlin’ Wolf’s “Louise.”

Moss’ style is a heavy blues with grit and sweaty grind, as purveyed in “You’re Love’s A Lie.” With the snappy jazz-funk of “Bolognious Funk” featuring Hundt on rhythm guitar and John Kattke on organ, and the thunderous drive typified by “Why Should I Care.”

Privileged has broad appeal, and should especially strike the fancy of those who think ZZ Top got off track when someone welded the compressor knob on 11.