Home Music Amos Garrett – Get Way Back: A Tribute To Percy Mayfield 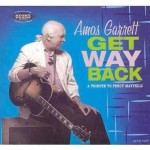 Garrett is, of course, best known as a guitarist (his tasteful solo on Maria Muldaur’s “Midnight At The Oasis” should have topped Rolling Stone’s recent “100 Greatest Guitar Songs”). Percy Mayfield (a big influence on Ray Charles and Mose Allison, among many others) was dubbed “The Poet Laureate of the Blues,” having penned classics like “Hit The Road, Jack” and “Please Send Me Someone To Love.” But it was Mayfield’s singing that exerted as big an influence on Garrett as his songwriting.

After bluesman Johnny Nicholas introduced him to Mayfield’s classic albums My Jug And I and Bought Blues in 1973, Garrett states, “Suddenly, I had a direction.” Garrett’s lazy baritone coupled with his wry sense of humor (his Canadian-based band is called the Eh! Team) make this tribute as logical as it was long-coming.

Mayfield had a promising career until a car wreck disfigured his movie-star good looks, and he ceased performing live. His were not your typical “my baby left me” R&B songs; he explored the dark side – in the case of “River’s Invitation” even addressing murder and suicide. But, as Garrett points out, “They maintained a high level of dignity and beauty – never maudlin or weak in any sense.”

Likewise, Garrett is not your typical guitarist, blues or otherwise. Over the years, his melodic sense and multi-string, Hawaiian-like bends have graced records by everyone from Stevie Wonder to Anne Murray, and he’s been cited as an influence by such aces as Richard Thompson, Pete Anderson, and Mark Knopfler.

Never one for excess, Garrett focuses on the songs here, but his compact solos leave his indelible stamp on “Pretty Eyed Baby,” “Never Say Naw,” and “Fading Love.”

It’s easy to see why fellow musicians are calling this Amos’ masterpiece.