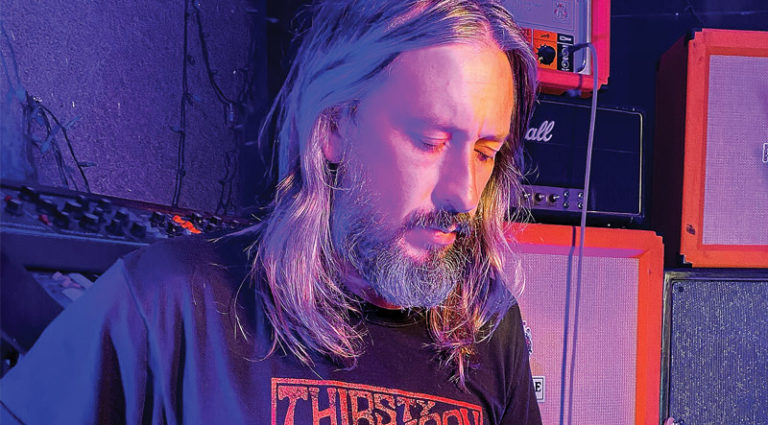 When not playing with the Black Crowes, guitarist Isaiah Mitchell works with Earthless, a power trio that just released Night Parade of One Hundred Demons. With just three tracks – each running about 20 minutes – the band delves into every nook and cranny of molten psychedelia, leaving room for Mitchell to blaze.

It’s great to hear a band opening the throttle.
Thanks. These songs are mapped-out in our own way; the title track has different themes that we give an open space for improvisation. It’s important for us as a band to have the freedom to express and compose in the moment, but also orchestrate little musical signals to bring us into the next sections. It’ll never be played the same way twice.

Do you start composing with a preconceived theme – or just see what happens?
The theme started developing once the title track came together. The riffs have a vibe of Japanese bands that we love like Flower Travellin’ Band or Blues Creation, and songs naturally drifted more into the territory of our Japanese influences. We used the idea of the Japanese folklore tale Hyakki Yagyo(“Night Parade of 100 Demons”) as a guide to create the music.

One hears traces of Steve Hillage, Black Sabbath, early Rush, and Ozric Tentacles.
Those artists can be put into our basket, for sure. Earthless is influenced by the Velvet Underground, Shuggie Otis, Black Flag, Bad Brains, ZZ Top, John and Alice Coltrane, Iggy Pop, Lee “Scratch” Perry, Flamin’ Groovies, the Meters, Led Zeppelin, Can, Free, and Freddie King. My guitar influences are similarly all over the place, but some off the top of my head are Neil Young, Mark Knopfler, Peter Green, David Hidalgo, Frank Zappa, Reine Fiske, John McLaughlin, Hubert Sumlin, Ry Cooder, Hendrix… it’s a never-ending list.

Which amps did you use?
For the basic tracking, I used a stereo setup with my ’71 Marshall Super Lead going into a Satellite Amps 2×12 cab. I blew up both the head and cabinet halfway through the session, so I borrowed a buddy’s late-’70s 100 watt JMP, and a vintage Marshall 4×12 with Vintage 30s. Alongside the Marshall, I used the Orange Custom Shop 50 head with the vertical 2×12 open-back cabinet with Creambacks. For the clean tones I used a late-’60s Super Reverb and Vox AC15 head through the Marshall 4×12.

Which guitars?
I used my main Strat, which is a bit of a mystery guitar but has been my number one since I was a teenager. I also had a Gibson Custom Shop ’56 Gold Top with P-90s, a Gibson Les Paul R9, an Ian Anderson Blackguard tele, a Prisma Guitars hybrid, and a guitar my uncle, Jerry, built for me called the UJ, which has P-90s. All of my guitars except the Ian Anderson have pickups hand-made by Mick Brierley, in Australia.

Your playing in the Black Crowes must be night-and-day from Earthless.
It’s a totally different approach. Earthless is a one-guitar band in a three-piece format, so that gives me the freedom and responsibility to paint the moods, while (bassist) Mike Eginton and (drummer) Mario Rubalcaba hold down the groove.

With the Black Crowes, I’m with another guitarist and a keyboardist, as well as a powerful front man, so I have to think about their placement and all the sound they’re creating – and being complementary to all of them. It’s a different set of ears.

Do you play Black Crowes’ more-famous solos note for note? What kind of direction do you get from Chris and Rich, as far as where to play – or not play.
I don’t play leads note-for-note unless I feel it’s absolutely integral to the song. I grew up listening to the Crowes, so some of those songs and solos are so engrained in my psyche that I want to honor them. Chris and Rich [Robinson] want me to be me and not be a mimic, which I’m very grateful for. I love Marc Ford’s and Luther Dickinson’s playing on those Black Crowes records, and I want to always honor their spirit, but be myself. At the end of the day, it’s about the song and Chris’ vocals, so my job is to serve the song and complement what everyone is playing, to make it sound whole. When it’s my time to take a solo, that’s when I step out and open it up.