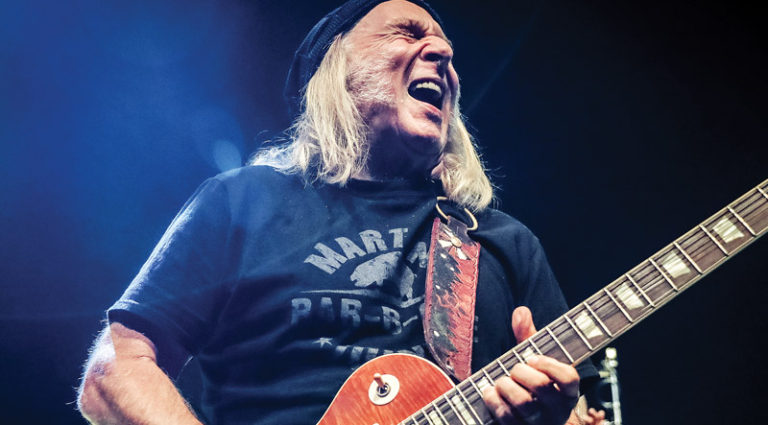 The pandemic knocked the Kentucky Headhunters’ 2020 plans out of whack, just like every other artist. It’s the primary reason That’s a Fact Jack! is the boisterous, Grammy-winning Southern rock/country band’s first studio album in five years.

“Our last official studio album was On Safari, and that was 2016,” Martin said. “Then we did Live at the Ramblin’ Man Fair in ’19, and that had outtakes from some old Johnnie Johnson tracks we had laying around. We hadn’t started on an album in 2020 at all. Basically, our lives have been the same for years – we go out and tour. That’s the way my life has been for years, because I started on the road with a country artist, Ronnie McDowell, back in 1981. So, I’ve been on a bus for 40 years.”

The Headhunters played a handful of dates early in 2020 and talked about a new album. Then the pandemic hit.

“The next thing you know, pretty much our whole year (of tour dates) had fallen out. We did end up playing 10 shows, then in November I tested positive for Covid and had to isolate for 10 days, so I missed the last show. Chris Robertson of Black Stone Cherry subbed for me. My case wasn’t that bad. I was very lucky.”

“Everybody took their ideas straight into the studio and we worked them up on the floor, then hit ‘Record.’ There was no pre-production. Usually, we’d get together and hash-out ideas first,” explained Martin. “This one took a little longer since we weren’t as sharp, because we weren’t playing together (on tour).”

Was it scary to work that way?

“Sure it was, but there was an urgency to the music that came out that wouldn’t have otherwise. We were in our pattern – tour, then do an album. But, in 2020, we didn’t know what was going to happen. When I had Covid, I didn’t even hold a guitar, and there are guitars all over the house. My calluses were soft for the first time in years. So, yes, it was a little concerning going in. But, with not really having a plan, there’s a freshness about the way it was done.”

One thing the Headhunters didn’t do early in the pandemic was record remotely; rather, they worked together in the studio.

Among the changes was a shift in lead-vocal responsibilities.

“Normally, Doug does the lion’s share of lead vocals – he’s the official singer – and Richard does three or four,” he said. “On this album, Fred did a couple, and I even jumped in on a song I wrote that we’d recorded as Itchy Brother back in 1973, called ‘Shotgun Effie.’ So, the album is eclectic. Stylistically, it covers a lot of different ground.”

Martin, who has hosted “The LowDown HoeDown” weekly radio show on Louisville’s WDNS-FM for 20 years (streaming at wdnsfm.com), is right about the variety. “How Could I” is country-rock honky tonk. A touch of ’60s pop coats “Cup of Tea.” The rockin’ side of the band jumps out on the title track and “Heart and Soul.” A reworked cover of Rick Derringer’s “Cheap Tequila” is included, Martin said, after Fred Young lobbied for years to do the song. “Let’s All Get Together and Fight” is a hysterical country tune about a family Christmas.

Thirty-plus years after 1989’s debut, Pickin’ on Nashville, was a surprise critical and commercial hit, a career highlight occurred in December when they played their first hit, “Dumas Walker,” the Johnson collaboration “Stumblin’,” and “Let’s All Get Together and Fight” at the Grand Ole Opry. Bill Monroe had approached Roy Acuff about having them on when “Dumas” first charted, but their long hair was a deal-breaker.

“Doug and I did the Opry back in the ’80s with Ronnie, but his was a first for the band playing there,” said Martin.