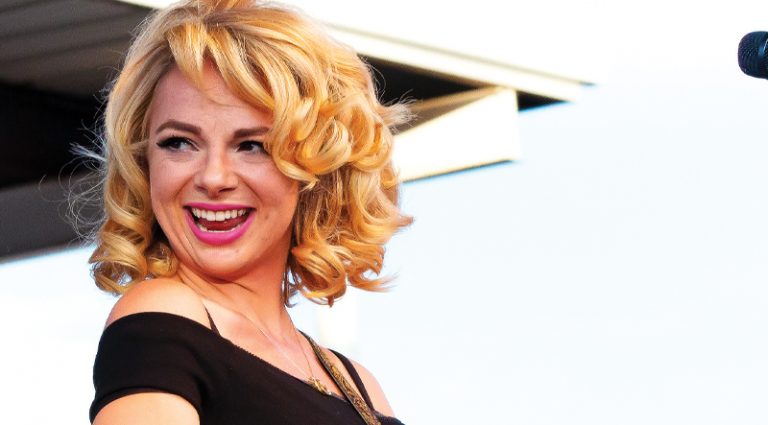 In 2012, Samantha Fish’s Runaway was named Best Artist Debut at the Blues Music Awards. Known for her energetic blues-rock concerts, she released two departures in 2017 – the R&B-tinged Chills And Fever and some country/Americana on Belle Of The West – and is a nominee for Vintage Guitar’s 2017 Readers Choice Award for Blues Player of the Year.

But the 28-year-old Kansas City native and New Orleans resident assures, “Every album so far has just been another layer of something that was inspiring me. The guitar didn’t go anywhere. We still dish it out pretty heavy in the show.”

What music first grabbed you?

My family was rock-and-rollers. So our CD collection was AC/DC and Led Zeppelin, and going back from them were people like the Stones, and everything was so blues-centric – and we didn’t even know. Later, I got into alternative rock and realized how heavily Jack White and the Black Keys were influenced by North Mississippi. I fell in love with that kind of blues music first. There was this punk-rock raw attitude about it. That’s how I found the North Mississippi All Stars and (producer) Luther Dickinson. Then you trace it back to Delta blues, where all that stuff comes from. We went to this tiny club in Clarksdale called Red’s, and T-Model Ford was playing. He was amazing – so raw and so real.

Were you involved in Kansas City’s music scene?

I was so quiet and shy in high school, nobody knew I played guitar until the last week of my senior year. The idea of being a frontman now – if I’d have thought that when I was a kid, “That’s not gonna happen.” My father and his friends all played guitar. When I started picking up my sister’s acoustic at 15, I started singing at the same time. I never really knew that I had a voice; I never sang, other than singing in choir in church. But there were lots of jams in Kansas City and cool clubs like Knuckleheads – still one of my favorite clubs in the world. That’s where I first saw music as a tangible career. When I’d see rock stars on TV, I didn’t know how to get from Point A to Point B. But when you start going out and enjoying the live experience, it’s happening right in front of you and you think, “I can do this. I can start here and work my way to where I want to go.”

Who were your early guitar influences?

We listened to the radio, so there was Keith Richards, Mike Campbell from the Heartbreakers, Angus Young, Black Crowes, Duane Allman, and I tried to play like Slash long before I should have. When I started getting into blues, I fell in love with Freddie King and Hubert Sumlin. Going backwards, I really love some of the weird tunings Skip James was playing in. And there were country guitar players I got hooked on, like Vince Gill and Brad Paisley.

When I was learning to sing, I was channeling soul singers. When I started writing songs, I fell in love with the way country songs were written and the heartfelt delivery, the poetry.

How was the Fishcaster born?

Mike Zito recommended me to Mike Delaney, who called and said, “I want to make you a signature guitar.” I really wanted a semi-hollow Telecaster with humbuckers, and he did a custom (fish-shaped) sound hole. He makes a V-style neck, but it was a little chunky for me, so he made the neck to my specifications.

I also have a Delaney 512, which is like a 335 but smaller, like a 339, and it has the same Amalfitano humbuckers. Recording Belle Of The West, sonically, my Telecaster didn’t really fit the profile of the album, so I used a bunch of Luther’s guitars. After those sessions, I called Delaney and said, “I want something hollowbody.”

What amps and pedals do you use?

Talk about playing with the Healers, the supergroup featuring Reese Wynans and others who’ve raised money to provide musical instruments for children with cancer and other serious challenges.

The late John Catt founded Blue Star Connection. He saw what music therapy programs were doing for kids in hospitals. Giving kids a focus and having music in their lives really helped their physical health and well-being. The Healers did a few benefit concerts, including a live CD and DVD from Knuckleheads, to raise money to get instruments and music therapy for kids in hospitals all over the country. It’s a feel-good operation, for sure. It’s gone through different incarnations, but as long as (saxophonist) Jimmy Hall is in it, it’s the Healers. I feel like music is the connecting language for everyone in the world – something everyone can understand and enjoy. It helps you find peace.