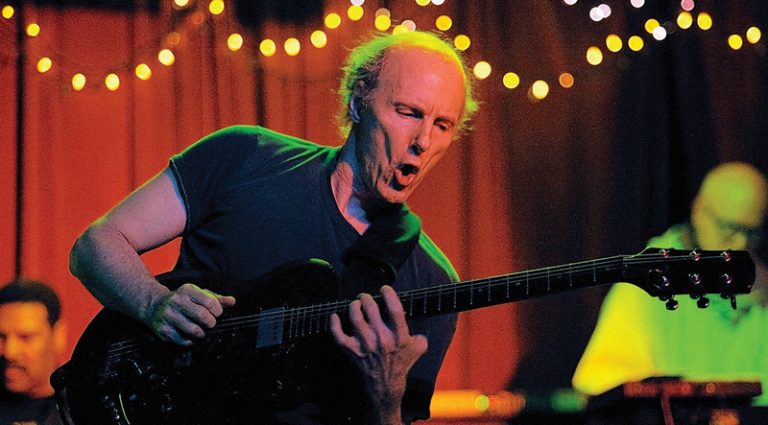 For more than 40 years, Glenn Phillips has been an underground hero of the guitar. His solo albums, unusual choices of gear, radical effects usage, and wild live shows broke the mold of guitar heroics. Phillips’ At the Rainbow, taped live in London in 1977, has just been released, and it’s a brilliant document of his instrumental acrobatics. We recently checked in with the Atlanta-based axe legend.

What do you remember about the ’77 UK tour?

I was a opening for Steve Hillage, and the Rainbow was the last date. The album was recorded on the Rolling Stones’s mobile studio, which was also used to cut Exile on Main Street and most of Led Zeppelin’s III, the fourth album, and Physical Graffiti. Before the tour, I did a couple of warm-up dates in London, one with the Troggs, who did “Wild Thing” and also an infamous bootleg tape of them bitching and moaning in the studio. That tape went on to inspire the movie Spinal Tap, and I got to hear some of their grousing in-person when we shared a dressing room.

How did you find a following in the U.K.?

When my first group, the Hampton Grease Band, broke up in ’73, I started working on solo material and sitting in with Little Feat when they played Atlanta. Lowell took a tape of my solo material to Warner Brothers and they decided to sign me. Unfortunately, I was still signed to Frank Zappa’s manager, Herb Cohen, who was suing Frank and the label. When Herb discovered Warner Brothers wanted to sign me, he demanded $100,000 for my contract and that was the end of my deal. Instead, I recorded Lost at Sea and somehow, DJ John Peel started playing it on BBC radio, and when Melody Maker held a reader’s poll, Lost at Sea finished second. This led Richard Branson to fly over from England and sign me to Virgin Records.

Although Mike Bloomfield isn’t as widely known as Hendrix today, in his heyday he was considered the most influential guitarist of his generation. Mike’s work on the first Paul Butterfield Blues Band album spurred white kids across the country to play the blues, and the improvisational 13-minute title cut on East West was the blueprint for the entire jam-rock movement. Go back and listen to the debut album of just about any California psychedelic band of the ’60s, and you’ll hear Bloomfield’s influence.

Mike even drove the guitar market. When he played a Telecaster on the first Butterfield album, everyone wanted one, including me. When he played a goldtop with P-90s, it suddenly became the sought-after guitar. And when he switched to a sunburst ’59 Les Paul on the Electric Flag album, those values shot through the roof.

Over the years, you’ve shared the stage with the Grateful Dead, Allman Brothers, and Zappa.

I’ve had the good fortune to play with many iconic acts. One weekend, we played with Zappa and the Mothers at the Fillmore East, and John and Yoko sat in with them; I was in Frank’s dressing room, jamming with him, when they arrived. I did shows with Peter Green’s Fleetwood Mac, Pink Floyd, B.B. King, toured with Captain Beefheart and Roy Buchanan, and done a week’s worth of dates with Muddy Waters. I even got to back some of my early heroes like Bo Diddley and Albert King.

Your choice of gear is pretty unusual.

I was drawn to the Gibson L-6S because it felt good in my hands, though I ended up modding it extensively. As for the MXR Pitch Transposer, I got one when they first came out in the late ’70s and used it regularly through the ’90s. I’ve been told I’m the first guitarist to use a pitch shifter for up-and-down pitch jumps.

I stripped it of every part then re-built it from the ground up. I had the fretboard flattened and re-fretted, replaced the tuners and pots, and put in an original Gibson PAF in the neck and a Fender Telecaster bridge pickup that I recently switched to a G&L pickup. I also installed a Jazzmaster vibrato, which required drilling a hole all the way through the body. But the first two guitars I ever owned were a ’50s Tele and a ’61 SG, and since then I’ve wanted a guitar that was a combination of my favorite aspects of the two. To me, that’s my L-6S.