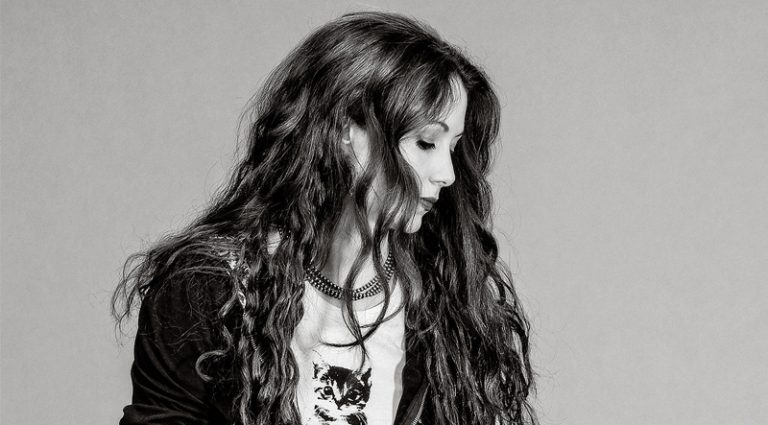 Every musician aspires to create music that will resonate through the ages and Abandon All Hope, by Zepparella guitarist Gretchen Menn, is an ambitious effort based on Dante’s Alighieri’s Inferno. Rich in melody and concept, the album weaves her melodic sensibilities amidst violin, cello, and viola via beautiful scores composed by Menn and joining nylon-string polyphony with soaring rock guitar.

The disc tells the story of the journey through Dante’s underworld, led by Menn’s exceptional guitar playing.

How did this come together?

I’d been thinking about combining music and literature when Michael Molenda (editor of Guitar Player) pitched the concept to me. One of the challenges with instrumental music is that it’s so abstract it can be isolating. I’ve often thought that by giving people something more visual, directly or through concept, it ends up being less abstract.

When I sat with Mike, I assumed he was going to say what everybody says, “Why don’t you sing and make a pop record?” But he laid this sheet in front of me: “Proposal Idea. Gretchen Menn – Dante’s Inferno: Journey in Eleven Different Musical Modes.” I was like, “I’m in (laughs)! You don’t have to tell me anything else!” It was coincidentally along the lines of what I’d been thinking. I was a music major, but literature goes just as far back for me. The idea of combining the two was obvious, but what Mike came up with was a slam-dunk. I looked at the concept and knew exactly what I was going to do. It was going to take a long time, and I had to get my orchestral and orchestration chops beyond what I had, even though I’ve been studying with a composition teacher. It took me about three years to compose everything between gigs and normal day-to-day stuff.

How did producer/guitarist Daniele Gottardo come into the picture?

I met him through a mutual friend. I’d heard his cover of the “Simpsons Theme” and stuff from his album, Non Temperato, and it blew my mind. It’s one of the best guitar records I’ve ever heard, especially for the sophistication and harmonic depth. It’s no wonder Steve Vai said he’s his favorite up-and-coming guitar player. We worked on my scores and producing a string quartet in Italy. Half the album was done in Italy.

The relationship between violin and distorted electric guitar is beautiful.

I have to credit Daniele for a lot of it. He was elevated from string co-producer to co-artistic producer because he was the only person I knew who had done an entire album blending electric guitar with classical instruments. There are tonal considerations, orchestration considerations… it’s a unique world. Having his experience was incredibly helpful.

“Tombs” is a great example.

I’d get tracks I was really happy with, and adjust guitar parts. I spent a lot of time trying to do complimentary vibrato, which is a great lesson. If you want to learn about vibrato, try to emulate classical string players.

“Grace” has so much emotion.

It was the last thing I wrote, so I got to do something different. It didn’t have to be infused with darkness; I wanted something with a different philosophical message. At that point, I was also four years more experienced as a composer. Some pieces have an easier flow, and that was one where I knew what I wanted.

My Ernie Ball Music Man Silhouette Special, a Les Paul on “Beast” and “Hounds Of Hades.” For the classical parts, a Kenny Hill Ruck guitar – it’s the one on “Lake Of Ice” and “Grace.” Except for “Limbo,” I tracked everything at my house and re-amped it. I used my Engl SE 670 with EL34s. It’s the best amp ever.

I have a lot of ideas and it’s always a question of where to focus the energy. I’d love to play Abandon All Hope live, but I want to do it properly. Zepparella is booked until the end of the year, so I’ll be fighting for time to write.