Marshall Crenshaw has worn so many musical hats. He authored a guide to rock and roll in the movies; portrayed John Lennon in the stage production Beatlemania; played Buddy Holly in the movie La Bamba; and even shared lead guitar duties with Wayne Kramer for an MC5 reunion. 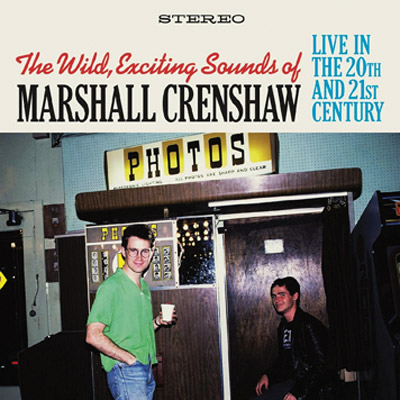 Subtitled “Live In The 20th and 21st Century,” this double-set provides an in-your-face helping of Marshall at his best. Because of his songwriting craftsmanship (favorites “Brand New Lover” and “Someday, Someway” are included, naturally), his guitar playing gets overlooked – which is a shame, because his rhythm and lead six-stringing take a backseat to few.

Check out his gnarly bends and double-stops on “Something’s Gonna Happen.” For interpretative contrast, the song is also presented in solo acoustic mode. He gets deep into rockabilly picking on Elvis Presley’s “A Big Hunk O’ Love,” and on “Whenever You’re On My Mind” he makes the dreaded chorus pedal sound good. There are six cuts with him fronting the Bottle Rockets, including Richard Thompson’s “Valerie,” featuring nice trade-offs with guitarist Brian Henneman.

Crenshaw, 68, writes in the liner notes, “It sounds like kids having fun.” It sure does.