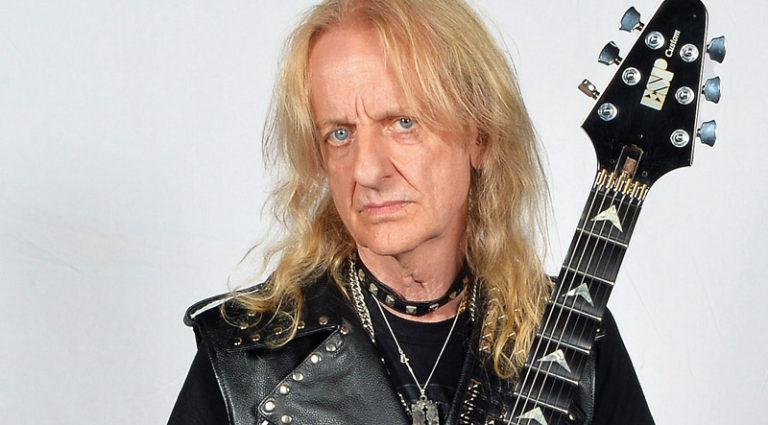 Classic heavy metal will never fade as long as K.K. Downing remains one of its torchbearers. Sermons of the Sinner, the debut album by his new band, KK’s Priest, is everything a metal disciple would want and expect.

Downing shocked metal fans when he left Judas Priest in 2011, after more than 40 years with the legendary band he co-founded. His 2018 autobiography was incredibly candid in regard to his creative frustrations, but Sermons of the Sinner blasts away those obstructions, joined by former JP vocalist Tim “Ripper” Owens, guitarist A.J. Mills, bassist Tony Newton, and drummer Sean Elg.

A series of events led to forming KK’s Priest. Downing stayed involved in music, including producing two albums by Mills’ band, Hostile. In August of ’19 he performed at a festival, and that November did a U.K. show featuring Owens, Mills, and others. The gigs got his creative juices boiling, and he jumped head-first into writing fresh music for a new band. He also salvaged a few ideas from the ’80s.

“I was totally on my own,” he said. “I had a lot to get off my chest, really, and didn’t find it difficult at all. For years, I’d been used to writing in a trio (with Judas Priest singer Rob Halford and co-guitarist Glenn Tipton). It was a collaboration, and a lot of times it was a compromise. So, I enjoyed the freedom to express myself, musically and lyrically, through this record.

“It was very important to make the record the way I wanted. I knew how I wanted it to sound – I wanted drums to be live and organic, and guitars in that happy medium between saturation and distortion. That worked fantastically well. With the bass, I said to Tony, ‘I want to hear every note you play.’ I encouraged him to play more, do a lot more fills. Sometimes, when I work with people, they seem a bit shy. I just said, ‘You can’t do too much. Trust me.’ I like bass, and I like to listen to bass fills. They add so much to an album.”

Sermons of the Sinner blends elements of the Judas Priest style. One hears the darker moments from 1976’s Sad Wings of Destiny and the speed and power of 1990’s Painkiller and Owens’ debut, 1997’s Jugulator.

“I proudly say that I don’t want to start again,” Downing said. “I don’t want the band to have a brand-new name, I don’t want a brand-new sound, new technique, or new way to record. I can’t just dispense with who I am and how I sound and how I play. I want to use the attributes I’ve nurtured all those decades. I’ve worked hard!

“I wanted to take things from the past forward with me, and that’s what I did. Taking some of the [Judas Priest] name is important to me because that’s who I am. When people hear the record, they’ll go, ‘That sounds familiar.’ I get to do more guitar-solo work, as well, which is good. That was lacking, really. I should’ve been allowed to do more on latter (Judas Priest) records.”

Having always cited Jimi Hendrix as his biggest influence, Downing was taken aback when asked why he didn’t form a new band with himself as the sole guitarist.

“You’re only the second person that’s brought that to my attention,” he said. “I could’ve. With Judas Priest in the late ’60s and early ’70s, I was the only guitar player. It never once entered my head, and I don’t know why. It would’ve been an option.”

Perhaps he didn’t consider it because fans will expect KK’s Priest to perform JP songs on tour?

“Consciously or subconsciously, maybe that’s what I was thinking. But I’m super happy the way things have turned out,” said Downing, who played a KxK custom, a Strat, and a Hamer Mini V along with early-’80s Alvarez flamenco and steel-string guitars on Sermons.

“The band is great. We’re going to be very good value live, I promise you that! Single-guitar bands can be an ego thing, but multiple-guitar bands have things to bounce off each other and can play harmonies. There’s a lot of harmony work on this record – more than any Priest record, I think.”

Ceil Thompson and her self-made guitar