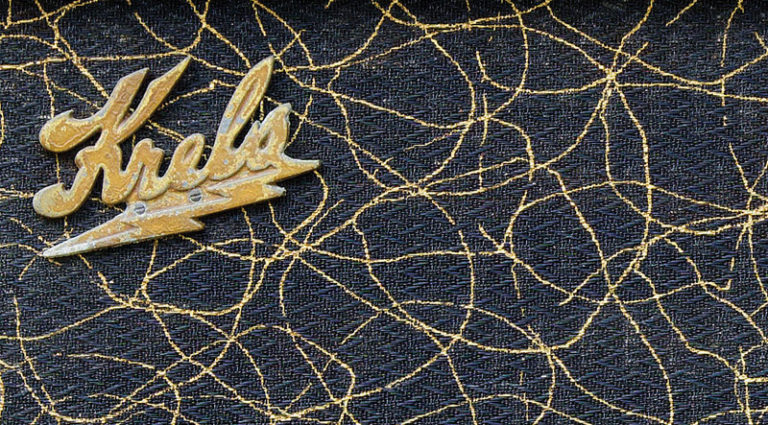 If you have no recollection of the revolutionary amplifier with 19 knobs, 23 tubes, and built-in tape echo created by Leo in California, chances are you’re thinking of the wrong amp guru.

Leo Krebs ran a music store in North Hollywood where, in the late ’50s/early ’60s, he built several innovative guitars and amplifiers – groundbreaking creations, if only a handful of people have heard them.

Little is known or written of Leo, other than word-of-mouth from L.A. musicians who frequented Leo’s Music on Lankershim Boulevard in North Hollywood. Krebs worked as an engineer at Ampex for some years, but any quest for further information mostly turns up reports of the famous 2006/’07 auction of what remained of Krebs’ inventory, sold when he passed away more than 30 years after closing his doors and moving to Oregon. Attending that auction, however, was one John Nottage, guitarist, vintage-gear fan, and VG reader.

“I heard about an auction in Rice Hill, Oregon – inventory from a music store in California that closed in the early ’70s,” Nottage tells VG. “Apparently, the owner brought everything in a semi-trailer and parked it next to his house until years later, when his son moved him to assisted living.”

Accounts of what happened leading up to the auction are a little foggy, though it appears many of the name-brand vintage instruments from Krebs’ inventory – a ’50s Gretsch Country Club, a ’30s Rickenbacker lap-steel, several new-old-stock Fender and Gibson electrics from the ’60s, a 1950 Broadcaster, and more – were sent to Subway Guitars, in Berkeley, to be sold on consignment. Many other pieces of gear, including several Krebs-built items, were sold at the auction.

“Rice Hill is a tiny community, so I was surprised to see a large turnout,” Nottage recalls of the auction. “I knew two other people there – Gary Hunt, and Bob November, of McKenzie River Music. Bob introduced me to three other music-store owners, one from Seattle, one from Portland, and the other from the Bay Area. The four of them bought most of the good stuff at prices I couldn’t justify, while the rest of us snagged whatever we could.

“There were good deals to be had if you paid attention, and there wasn’t much interest in the Krebs amp,” he added. “I got it for less than the speakers are worth. I’d never heard of Krebs, but there were the two amps I bought and another small, Champ-ish Krebs someone else got. There was also a Krebs pedal-steel.”

Hunt, an instrument broker, said the number of items cleared from the estate was breathtaking – everything from horns to paper products, instruments and amplifiers including Fenders, along with parts for everything you could imagine.

“The auction company put a dumpster out front and was throwing away a lot of stuff,” he said. He was told someone pulled Bakelite Telecaster pickguards from it.

“I still have several Krebs logos and a lot of the parts – prototype pickups, some Lucite guitar necks, and other things that aren’t worth much.”

Krebs’ great-nephew, Aaron Curtis, noted the story of those Lucite necks started when Krebs poured the first Lucite guitar during his time at Ampex.

“A friend in California sent photos from the Krebs shop that show Leo and his wife, Hilda, playing a Lucite guitar and bass,” he said.

Krebs also built his own rendition of the Fuzz Tone, which was used by Steve Lukather among others. So, clearly, there were other innovations that never took off. In addition, the existence of several badges labeled “Fife and Nichols by Krebs Enterprises” with blank serial-number slots indicates Leo was manufacturing – or intending to manufacture – equipment for one of Hollywood’s most important music stores of the day. But it’s the amp we’re here for – and what an amp it is!

To be precise, Nottage’s acquisition involved amps – plural – the main combo and a satellite power amp/speaker rig. The latter is an interesting concept occasionally used by other makers, but it’s the former that pushes the “What can we cram in here?” factor right off the charts. Again, this thing carries a ridiculous number of controls on its angled control panel, and an even more unconscionable number of tubes – features that together make it difficult to conceive not only of who would design such a thing, but who would then be bold enough to wire it!

The tubes are five 12AU7s, seven 12AX7s, two 12AY7s, one 5879, and two EL84s for an output of 15 to 20 watts, but there are also five empty tube sockets with no labels – one reason the amp remains unplayed. Lift the hinged panel to which the chassis is attached and roll it forward, however, and the underside reveals a plethora of additional components.

The built-in tape echo is constructed on a sort of plinth, enabling it to hover above the capacitor cans, transformers, and other parts. It uses a 30″ loop of recording tape with six heads to record and play back the echo. The cab carries a pair of 10″ Jensen P10R Alnico speakers, and mounted alongside them, “There’s a built-in fan so you can heat your house with the 23 tubes,” Nottage laughs.

The control panel, replete with stamp-punched lettering, carries knobs for Vib (depth) and V. Rate, so some of those tubes were for a vibrato circuit. Further to the amp’s do-it-all aspirations are two pairs of instrument inputs (guitar or otherwise), an XLR jack for “L.Z. Mic” (low-impedence microphone), a 1/4″ input for a high-impedence mic, and an RCA jack for phonograph input, all with individual Volume controls. In addition, the center of the panel displays “M. Vol”; Master Volume that was rare in the day. Without getting the amp up and running, it’s impossible to tell quite what the dual VU meters are measuring, but they’re a nifty visual.

Whatever the truth of the matter, we prefer to imagine that this Krebs combo sounded utterly glorious when fired up and running, its evocative vibrato and rich tape echo generating untold depths of atmospheric tone. In fact, let’s assume its considerable weight and the immense hassle of repairs are the only things that kept it from becoming the best-seller Leo Krebs must have dreamed it might one day be.