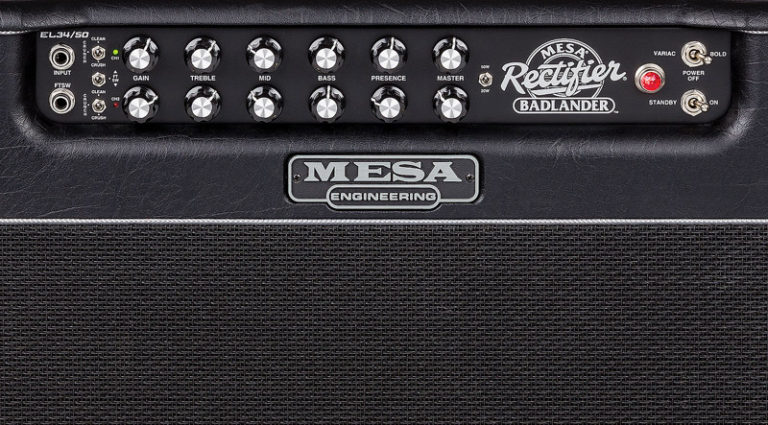 When Mesa Boogie introduced its Dual Rectifier amps in the early ’90s, they cemented a place in rock-and-roll history. Over the past 30 years, there have been several incarnations of Rectifier-series amps.

The Badlander has two footswitchable channels, each with a three-position switch for Clean, Crunch, and Crush modes. Tone-sculpting EQ controls include Bass, Mid, Treble, Gain, Presence; another toggle switches between a tight, punchy feel (Bold) or a looser feel with more sag (Variac). And if the full 50 watts are too much, you can switch it down to 20 watts.

The Badlander sets itself apart from the pack on the back panel. Given the popularity of direct recording with impulse response files (a.k.a. IRs, modeled sounds of various gear) and cabinet simulators, Mesa made it easy to get your sound into a computer. The Cabclone XLR Direct Output sends IR signal out and uses the amp’s built-in IR cabinet simulators. Each of the Badlander’s channels has a dedicated knob to switch between eight speaker-cabinet sims. More third-party simulations can be uploaded via USB. There’s also a headphone jack that utilizes the Direct Out’s IRs to create a “silent” practicing tool, and a bias switch for the 6L6 tubes.

Anyone familiar with the Rectifier series knows their high-gain tones are top-notch. The Crush mode, with its tight, defined distortion, goes from high gain to “more than enough” via the Gain knob. The tone is thick, clear, responsive, and chewy with outstanding feel under your fingers, along with endless, singing sustain. Switching to the Crunch and Clean modes takes you from medium distorted tones down to rich, bouncy, musical cleans while maintaining a tactile feel with impressive pick attack. Even more compelling is that you never feel like you need to change your EQ or Volume as you switch between the three modes.

The Badlander 50 Combo is an outstanding and versatile amplifier and a logical evolution of the revered “Recto” series. And it may be the best yet, given its user-friendliness, versatility, and modern tech in a compact package.