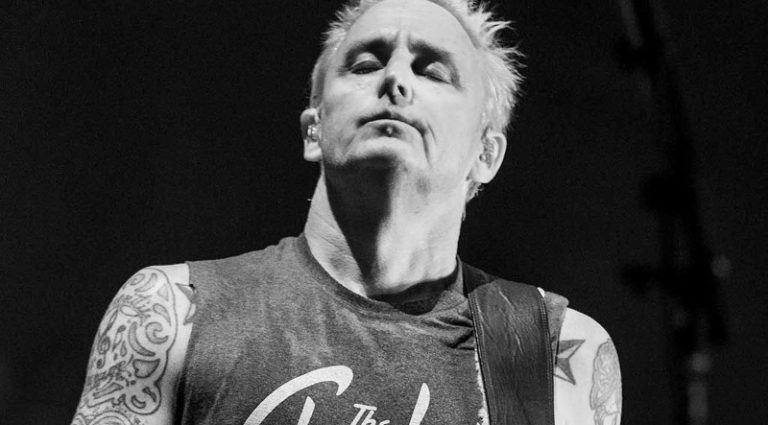 “I smashed a lot of guitars!” says Mike McCready of his nights onstage as Pearl Jam rode the crest of ’90s grunge – a time when hard rock returned to all-out rebellion against society’s ills and injustice.

In the heat of live performance, emotion spurred action; Pearl Jam shows often bordered on riots – musicians drenched in sweat, singer Eddie Vedder climbing theater balconies and swinging from lighting trusses as swarming, sweating crowds bounced rhythmically with the band. McCready admits his Hendrix and Townshend influences sometimes went a step too far in those moments, but he can’t change the past, and doesn’t dwell.

“The people at Fender were not happy about what I was doing,” he said. “And for good reason, because those were nice Strats and Teles.”

McCready’s first guitar was a Japanese-made Matao Les Paul copy acquired in 1978, followed by a Kramer Pacer and an Ibanez Iceman. His first real vintage piece was a Strat he bought in 1991, paying $7,000 for what he was told was a suitably worn ’59 like the one played by his biggest musical hero, Stevie Ray Vaughan. For years, it served as his number one road dog and recently became the subject of a Fender Custom Shop Limited Edition created to mark the 30th anniversary of Pearl Jam’s breakout album, Ten. In the process, the guitar was identified as a 1960 model.

Today, McCready tends to a collection of about 40 instruments, roughly one-third of which are acoustics. On tour, he’s accompanied by about 25 of them. We chatted with him to learn more about his story, the collection, and the Custom Shop Strat.

So, the Matao… was it a good guitar?
It was a hundred-dollar guitar (laughs). I got it from Kennelly Keys Music.

But it did the job?
Yeah, and I started playing in bands very quickly; in seventh grade I joined a band called Warrior. I played it in The Portables and at a talent show. There’s a picture of me hucking that guitar up in the air – because that’s what I thought rock and roll was (laughs). I broke the neck when I threw it one time trying to impress a bunch of people, so we had to get it fixed. But it was a pretty good guitar. I remember that I – don’t do this at home – I chiseled off the black finish and spray-painted it to make a “goldtop.” I might’ve got a few splinters doing that (laughs).

Most would try paint stripper or maybe sandpaper.
I know, right? It just made the most sense at the time. It was terrible.

What other guitars did you have before Pearl Jam was formed?
Before Pearl Jam, I had a 1960-reissue Telecaster and a ’30s Kalamazoo Oriole.

And of course once the band was rolling, you added a few.
Yeah, I had an import Strat that Jeff (Ament, Pearl Jam bassist) and [co-guitarist] Stone Gossard got for me. I played that on Ten and in Temple of the Dog. I also had a goldtop right about the time we did Ten, or maybe it was right after, for Vs. But the ’60 Strat was the big one – my dream guitar because of my love for Stevie Ray. As my musical aspirations were coming true, it was like, “I can finally afford to get a vintage guitar.” I never thought I’d be able to, and then Ten blew up. I remember it being $7,000 in 1992, which was a lot of money – still is – and it was pretty beat up but not as much as you see in the booklet that comes with the anniversary guitar.

Which songs did you play on the original ’60?
Well, I didn’t have it for Ten, of course, but I used it a lot live when we did all of those songs; I’ve probably played “Even Flow” on it 500 times. If I do “The Star Spangled Banner,” I use it, always – I’ve done it for the Seattle Mariners, the Seahawks, and for the Crohn’s and Colitis Foundation. In terms of records, you’ll hear it on “Daughter,” from Vs., and on “Life Wasted,” from 2008. It’s also on our 2020 album, Gigaton; I used it for “Superblood Wolfmoon” and “Dance of the Clairvoyants,” where I was going for a Carlos Alomar reverb sound and tight picking attack.

Which Strat did you use to record “Yellow Ledbetter”?
That was a ’57 reissue with a maple neck that I bought around the time Jeff and Stone bought the ’62 reissue for me. But I did use the ’60 to play “Ledbetter” live forever because I knew it would sound good and deliver what I needed.

Do you still have the ’57 reissue?
Yes, it’s in many pieces somewhere, along with the ’62 reissue I smashed to pieces during a Mad Season concert at the Moore Theater [in Seattle]. They were both really cool guitars, but when we were hitting those highs, and me being a fan of Jimi Hendrix and The Who, all of these things going through my mind and I was breaking s**t. It just happened because it always felt so good.

If you had it to do over, might you take a different attitude toward breaking all those guitars onstage?
Probably not, but I also feel that yeah, I could have done something more with those guitars, maybe given them to other people. I do have more of a conscience now.

One could argue the “Ledbetter” guitar belongs in a display at the Rock & Roll Hall of Fame.
Yeah, but it’s never to be. The Hall of Fame does have a Candy Apple Red Strat I broke during a show in L.A., which I surprisingly found when I was walking around there. It’s in pieces.

Who from Fender first approached you about doing the Custom Shop Strat?
Michael Schulz, who is Fender’s Head of Signature Artists. He reached out to George Webb, who runs our warehouse and is Jeff’s bass tech. George asked if I’d like to do something and I was like, “For sure.” So we had a meeting and he and one other member of their team stopped by and looked at it. Then we sent it down to Vincent Van Trigt, one of Fender’s Master Builders; George flew down with it – I was gone, so I couldn’t. I had earlier visited the facility in Corona, and it’s amazing, but I didn’t get to meet Vincent. I met a couple other Master Builders – one was working on a Phil Lynott tribute bass, another was helping on a David Gilmour Strat. They’re maestros, and it was fascinating to watch what they do, and see the facility and how much people love working there.

Did you get to talk about their techniques?
No, they’re pretty quiet about the process.

How did you exchange ideas with Vincent?
We sent notes back and forth The main thing was it had to play, and Vincent made it play and sound great right away. There were a couple aesthetic things I wanted changed, so I sent notes saying, “It should be a bit more yellow here” or “Put a couple more scratches there.” We refined the belt-buckle marks. After a few notes, he did so well that I had a hard time telling it from my original. I put it right next to the ’60 in my studio, and later I grabbed it and started playing, thinking it was the original. That happened three times, including when we were shooting the promo video for Fender. My favorite feature is the playability of the neck – it’s so worn-in and easy to play. It’s the best neck and fretboard of any of my guitars. I also love how light it is.

Your collection includes two ’59 Les Paul Standards.
Yeah, I have the ’59 I got in the mid ’90s, which was once owned by [Billy Harrison], the guitarist in Them, which he bought in Seattle in the mid ’60s then took back to Ireland and kept in a bar – he’d play it, then put it in a back room. Eventually, he got sick, so he sent it back to his daughter in Seattle to sell it. They sold it to Danny Mangold, a really good dude who had Danny’s Music, in Everett, and he called me one day and said, “Hey, I’ve got this Les Paul. You want to check it out?” His price was 25 grand, and I traded a few guitars and some cash for it. I played that guitar forever – it’s the one on “Alive” and I used it a lot for live shows, especially for “State of Love and Trust.”

When did the second ’Burst enter the picture?
Right around when we did the deal for the first. That one has a little spot on the top, we think from fading around a sticker that was on it while it sat in a store window. It’s really cool and I use it a lot. It has one zebra PAF and one double-cream.

How do the two compare?
The second one is hotter-sounding – meaner – and the older one is kind of bluesy sounding; those are my technical terms – meaner, bluesy, heavier (laughs).

What are some of your other favorite vintage solidbodies?
I have a ’58 maple-neck Strat that I love, and use live sometimes for “Even Flow.” Like most players, I really like the feel of a worn-in old guitar. I don’t love the finish on a lot of necks, so when I get a newer one, I’ll sand it down a bit.

There’s also a ’59 double-cutaway Les Paul Junior I like a lot for its New York Dolls/Johnny Thunders vibe. My wife got that for me when I turned 40; it’s a factory second because there was overspray that bubbled on the back. And now it’s got cool crackling in the finish.

I also have a ’56 Strat that once had “Art Hearst” on the top, in stickers. I never found out who he was, but country guys back then sometimes put those on their guitars. The back of the neck has his finger grease all over, and even though the stickers were worn off when I got it, you could still see his name. Thank you, Art Hearst, for that guitar!

What are your preferences in acoustic guitars?
I love my mid-’60s Gibson Dove and Hummingbird. I also have a newer Doves in Flight from the Montana factory; it’s so beautiful. I also have a couple of Martins I like a lot, but I gravitate to the Gibsons because I saw the Stones using them in pictures from Exile on Main Street, and I thought, “Well, they’re my favorite band.” There’s a mythology to them, about how Gram Parsons played them, and the Everly Brothers. I bought into it, and still do, but they also play great and sound so warm. 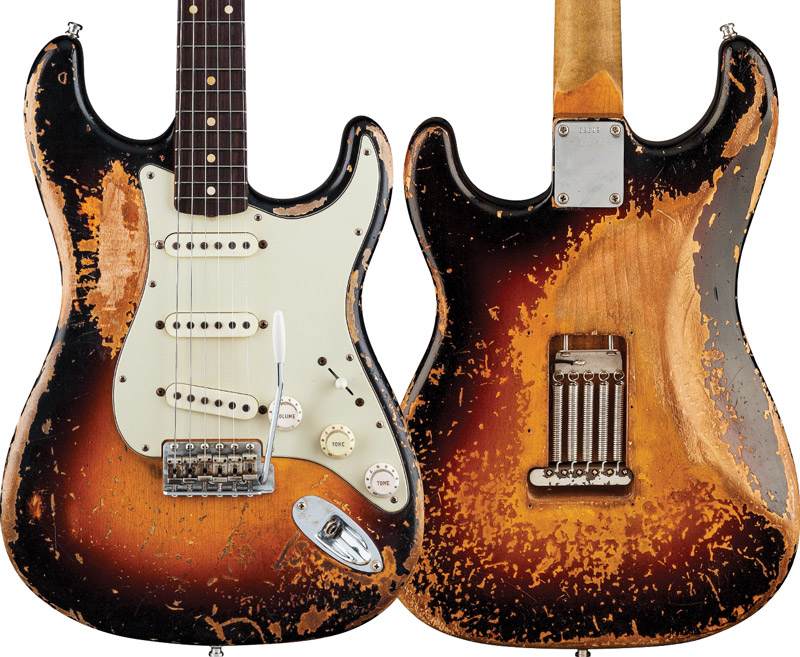 Special thanks to Chris Adams.