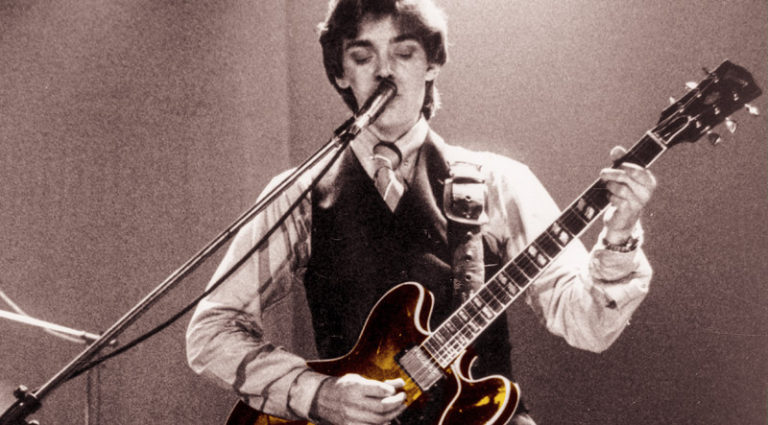 For a shining moment, the eclectic British quartet Be Bop Deluxe rose above an upheaval in rock and pop in the late ’70s, as fresh hard rock and Southern bands flooded the airwaves along with disco divas and a subversive new sound labeled “punk.”

Within the maelstrom, Be Bop Deluxe mixed art concepts, thinking-man’s lyrics, and axe heroics galore. After several studio efforts, the band broke through with Live! In the Air Age, a 1977 concert platter unleashing the six-string assault of front man Bill Nelson.

To capture every stop of the winter ’77 tour of the U.K., the band had hired the Rolling Stones’ mobile studio, famously used for Exile on Main Street and Deep Purple’s “Smoke on the Water.”

“I remember the Stones’ mobile parked outside and its cables running from the truck to the stage; it took quite a while to get it all connected,” Nelson recalled. “When we played Leeds’ Grand Theatre, my mother attended the show and I played a little quote from ‘I Dream of Jeannie with the Light Brown Hair’ for her.”

Given the inconsistent studio technology of the era, one band might release a great-sounding album, while another’s might sound like a cardboard box. Air Age delivered remarkable fidelity.

“That was a combination of the band’s performance and John Leckie’s engineering,” Nelson speculated. “We also mixed the album in a bigger studio and had a little more technical equipment at our disposal, sprinkling a bit of fairy dust on the final mixes. The analog technology of that time was in many ways simpler than today’s digital – it was far more direct.”

Another hallmark was how incredibly tight Be Bop Deluxe played onstage, with unison riffs and guitar licks flying in every direction.

“We certainly rehearsed for our tours,” Nelson added. “I’ve always found rehearsals to be a chore, but I will say this: We were four very capable musicians who had a chemistry that worked to our advantage. I never wanted the band to be just about technical proficiency. While some people heard elements of prog-rock in what we did, I tried to avoid mathematical, overly complex playing. Our songs were not simple and it took technical skills to pull them off, but I also wanted our music to be poetic, whimsical, and often romantic and beautiful.”

For guitar thrills, Nelson’s lead in “Adventures in a Yorkshire Landscape” was a high point in every show, a ballad with an incendiary solo touching on rock and jazz concepts.

“I’m not an academic, trained player, nor do I read music or have any musical theory to boast of, but I’ve always loved jazz,” Nelson noted. “As a teenager I was listening to Wes Montgomery, Joe Pass, Kenny Burrell, Jim Hall, and Charlie Byrd – but at the same time, Chet Atkins, Scotty Moore, Duane Eddy, and the Shadows. I absorbed all kinds of music, but jazz shaped a lot of my playing.

“‘Yorkshire Landscape’ evolved into something where the band could open up and improvise, so my solos for that song leaned in that jazzier direction.”

“I used my Gibson ES-345, which my father had bought me in the early ’60s,” Nelson remembers of his stage setup. “I played through two 100-watt Carlsbro heads with a custom preamp, six 2×12 SAE speaker cabs, and two HH tape-echo units. I really liked the way the HH echoes created otherworldly, haunting atmospheres. I also had a Pete Cornish custom pedalboard with an MXR Phase 90, Big Muff, Uni-Vibe, and an Electric Mistress flanger. It was also a very loud setup – which is why I’ve now lost my hearing in my right ear – but loud was the order of the day back then!”

One name often lost to history is Charles Tumahai, the late bassist for Be Bop Deluxe. Aside from his crisp four-string work on Fender Telecaster and Precision basses, New-Zealand-born Tumahai was a gifted backing vocalist.

“I liked Charlie tremendously,” Nelson said. “He could get a bit wild sometimes when the drink was in him, but he was a great musician and I was very fond of him. Onstage, I was generally locked-in-position at the microphone and my pedalboard, but Charlie was free to hop and skip around, which added movement to our stage show. We had a great time playing off each other.”

Be Bop Deluxe’s meteoric six-year run ended abruptly in 1978, after the new-wave-infused, yet underperforming follow-up Drastic Plastic. Fortunately, people are still talking about the group, and especially Live! In the Air Age, decades later. Still actively recording new albums, Nelson doesn’t dwell on the past, but offers insight on what made the band so special.

“I was always trying to push things a little further, reaching for something slightly out of reach,” he said of his writing and arrangements. “I only ever heard the flaws in what we did, so it was difficult for me to see Be Bop Deluxe without that kind of critical filter. Nevertheless, I find it astonishing that more than 40 years on, people are discovering our music and reacting so positively to it. For that, I’m grateful.”