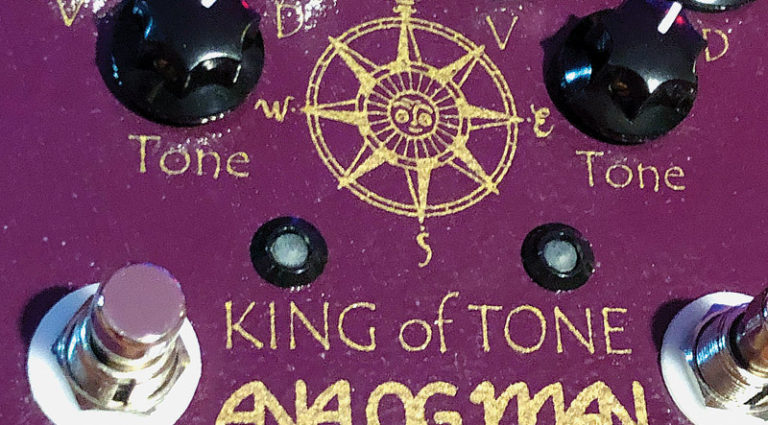 Amid this golden age of music gear, the Analog Man King of Tone Overdrive, first produced in 2005 in collaboration with Jim Weider, heads a distinguished list of “Holy Grail” stompboxes. If you feel a severe bout of eye-rolling coming on, ask Jimmy Herring, Carl Verheyen, Luther Dickinson, or Gary Clark, Jr. why it’s on their pedalboards. Also, Analog Man founder Mike Piera has a waiting list for the pedal. So, what’s the big deal?

Piera calls the latest iteration Version 4. At its core, the King of Tone is a modified Marshall Blues Breaker pedal, meticulously dimed to the point where it has its own character – an adult overdrive pedal for guitarists who want to maintain the integrity of their rig but increase gain in the tastiest possible way.

The KOT is two-sided, with independent settings. Each has Volume, Drive, and Tone controls, and they can be blended to taste. Boost, Overdrive, and Distortion are switchable via internal DIP switches.

In testing, virtually every setting on the KOT sounded fantastic. It’s not a high-gain pedal, but instead delivers smooth, mellifluous overdrive and long-term sustain with gritty complexity and heavenly headroom. It’s musical, providing warmth, grind, and a distinct richness found in very few other overdrives.