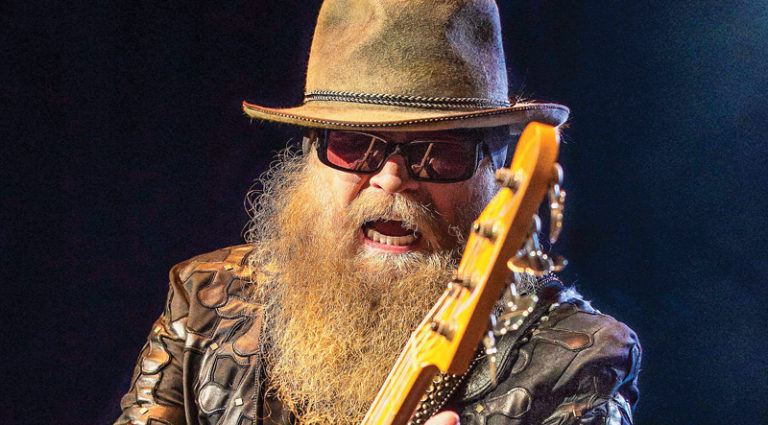 It didn’t take long for testimonials to pour in to VG following the death of ZZ Top bassist Dusty Hill.

“Dusty Hill has the patent on the blues-rock groove!” said Muscle Shoals bassist David Hood. “No one did it better.”

“He was a solid bass player and amazing performer,” added Harvey Brooks, bass man with Electric Flag, Miles Davis, and Bob Dylan. “I didn’t know him personally, but I’m a big fan of the band. To his family and bandmates, condolences from Jerusalem.”

Creedence Clearwater Revival’s Stu Cook said, “Dusty was one of a kind, a legend, and a gentleman. His driving bass playing helped lay the foundation for that Little Ol’ Band From Texas for over 50 years. Rock on, sir.”

Dallas-born Joe “Dusty” Hill passed away at his home in Houston on July 28. His wife of 19 years, Charleen “Chuck” McCrory, wrote on Facebook, “He woke me up and we talked, and as he was sweetly chatting with me, he suddenly stopped and he was gone in an instant.”

Hill was 72. The cause of death was not determined.

Decades-long ZZ guitar tech Elwood Francis had, at Dusty’s request, filled in when Hill had to leave the tour to attend to health concerns. Following Hill’s death, he took over bass duties to cheers of relief and encouragement from fans.

Thus ended ZZ Top’s record run as rock and roll’s longest-surviving band with the same personnel – 51 years. With all the acclaim the trio has received over the years, along with their cars-and-babes videos and cartoon-character appearance, what’s often forgotten is that they were, and are, formidable musicians and songwriters. Hill’s anchoring bass was an essential ingredient, as were his upper-register vocals on songs like “Hi-Fi Mama” and the 1975 hit “Tush.”

With older brother Rocky on guitar, 13-year-old Dusty played bass in the Warlocks, followed by the band American Blues. Their drummer, Frank Beard, moved to Houston and connected with guitarist Billy Gibbons, formerly with the Moving Sidewalks. After Beard introduced Gibbons to Dusty, their first jam – a blues in C – lasted two hours.

“A band has to have a solid foundation beginning with bass and drums – especially a three-piece group,” Sidewalks bassist Don Summer points out. “That gives the guitar player the freedom to explore without fear of getting lost. After [keyboardist] Tom Moore and I went to Vietnam, when Dusty and Frank showed up, Billy knew he had his group set to boogie.”

It’s no small feat to be thunderous and swinging at the same time, but that innate lilt set the band apart from other rock trios, like Cream and the Jimi Hendrix Experience, as well as quartets with only three instrumentalists, like Led Zeppelin or the Who.

In 2016, Hill told For Bass Players Only, “When I started playing in a three-piece, I realized that you have to do the song, not your personal performance, so you have to be tasty with it and enjoy the playing. Sometimes you don’t even notice the bass – I hate that in a way, but I love that in a way. That’s a compliment. That means you’ve filled in everything, and it’s right for the song, and you’re not standing out where you don’t need to be.”

In ’76, after the group’s fifth album, Tejas, and their elaborate Worldwide Texas Tour, Beard entered rehab. At one point during the subsequent three-year hiatus, Hill cut his hair, trimmed his beard, donned a work shirt with a patch that read “Joe,” and got a job working at the airport. As he said in the documentary That Little Ol’ Band From Texas, “I just wanted to feel normal. It gave me a sense of being grounded.”

Dixie Dregs bassist Andy West recalled how as a young band in the late ’70s, they were invited to open for ZZ – the Dregs’ first experiences playing for really large audiences.

“It was an act of kindness to fellow musicians I will never forget,” he recalled. “Dusty was so iconic in style and sound, and the perfect ‘Texas grooves’ he laid down were deeply intrinsic to the music in a way that enabled ZZ Top to become a truly classic band. Though the group will continue with his blessing, and appropriately with a good friend and longtime crew member, I will continue to see Dusty laying it down in my mind whenever I hear ZZ Top.”

Too often, “solid” becomes equated with “simple.” For that matter, “simple” is seen as a negative, dismissing the skill it takes to turn something simple into art. But make no mistake about it: From Frank Beard’s propulsive drumming to Billy Gibbons interchanging lead and rhythm to Dusty Hill’s double-wide bottom end, ZZ Top was built on a foundation of supreme musicianship.

It may seem unthinkable to regard induction to the Rock & Roll Hall of Fame as a footnote, but ZZ Top is more than music or entertainment, or even art; it’s part of popular culture. Just as the group evolved and reinvented itself over the years, a new chapter now begins. But the “Dusty era” will forever be cast in stone. More accurately, cast in Rock.

Between Gibbons and Holdsworth