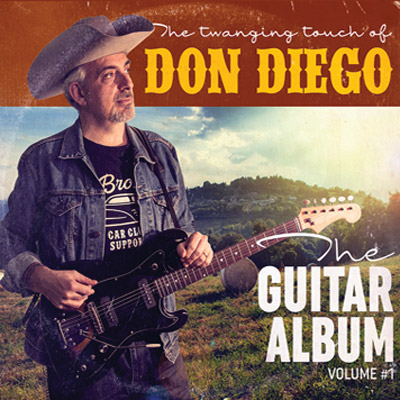 The title might sound generic, but even a cursory perusing of the repertoire and execution explains why it’s so fitting. Eclecticism can be dangerous, but Italy’s Diego Geraci has the versatility to pull it off.

He covers a plethora of genres without inducing whiplash, because his playing is so spontaneous. He can take Freddie King’s “The Stumble” and show reverence sans stuffiness – tossing in whammy shakes, chicken pickin’, and Buchanan-esque bends.

There’s also a Chet-inspired “Love Me Fender,” “Caravan” à la Merle Travis, and an uncanny Les Paul impersonation on “Bye Bye Blues,” with the “Steel Guitar Rag” hook thrown in. Obscurities like Roy Nichols’ “Whooper Snooper,” John Pisano’s “Felicia,” and George Barnes’ “Jolly Joe Clark” earn equal time, while originals like the cinematic “Sunset In Holt” and the acoustic “Benediction” hold their own with homages to icons from Cliff Gallup to Nokie Edwards.

The best cut is his drenched-in-reverb tango arrangement of the theme from The Godfather that will have you asking why the legions of surf bands didn’t think of it. And after displaying extremely impressive chops and dexterity, Don Diego demonstrates the beauty of a simple melody with Buddy Holly’s “Raining In My Heart.”