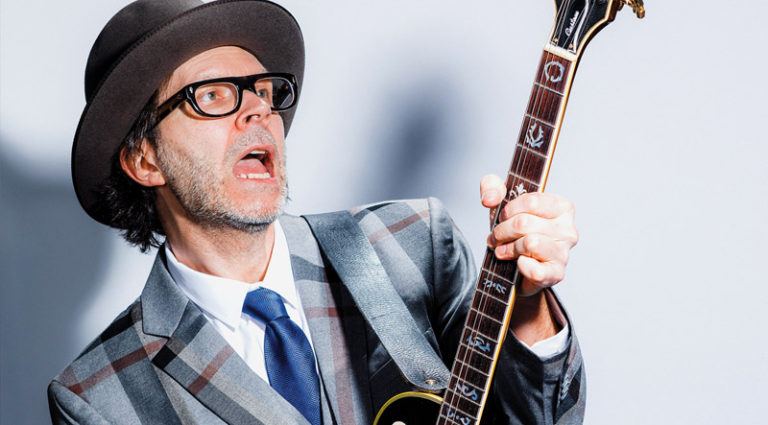 Paul Gilbert’s 16th solo album, Werewolves of Portland, is an ambitious DIY project where he plays all the instruments. From The Beatles to Pat Travers to Brian May, Gilbert’s fretboard imagination runs the gamut.

As he continues to move beyond his shredtastic origins, Gilbert is embracing a positive outlook, a sense of humor, and his lyrical side with new and expressive techniques, including slide guitar.

You’ve been playing a lot of slide lately.
It keeps getting more comfortable, but it was horrible when I started (laughs). Doing Mr. Big records, I’d get the veto from producer Kevin Elson when I’d try to do a slide solo. He used to be the sound engineer for Lynyrd Skynyrd, and those guys are real slide players, so he’d hear me and go, “Paul, play how you play… put that thing away.” (laughs)

But as I started listening to more blues, I’d hear more in what the slide was good at. In a way, that made the target a little more real. Before, I was trying to reproduce my scaley kind of playing, and slide isn’t particularly good for scales. Basically, you become a one-finger guitar player, but if you stick to chord tones, it works a little better. Also, most melodies are put together that way. It works great for melody. The other thing is I barely learned any slide licks. I love Johnny Winter and all the great slide players, but for whatever reason, I think I’m intimidated. Copying a real slide guitar player is scary.

Your slide style leans more toward George Harrison than Elmore James.
That’s because all the practicing I’ve done has been copying vocals. The first one that I aimed at was “Mercedes Benz,” by Janis Joplin. That was three years in, trying to learn all the slidey things. I get sick of hearing what I’ve been playing for the last 30 years. Slide is exciting because it’s a whole new personality and voice for me.

What compelled you to play all the instruments on Werewolves of Portland?
I was going to do it like I did on Behold Electric Guitar – live band in the studio, which was quick, easy, and fun. I had all the players, so why mess with it? But we did one rehearsal and the Covid thing hit. Suddenly, no one can be in the same room, breathing the same air. So, I put everything on hold. Hold got longer and longer, and I’d been pre-selling the record. I like working quickly, and there’s a certain energy you get when you make the music. So, I got the hare-brained scheme to play everything myself, and I started to get really excited. I love the drums, I can play bass, and I know keyboards well enough to play pads. So I got an engineer to set stuff up and I pounded away. I had to hire someone to do one little snare buzz roll because I don’t know how to do that. If you’re a marching-band person, you know how to do that. I don’t have sophisticated technique on drums.

Which guitars did you use?
I brought in a bunch. One is an Ibanez Roadstar II that feels like Van Halen I, before Eddie had the Floyd Rose. It has a longer bar and I used it on “A Thunderous Ovation Shook the Columns.” It’s got VHI style whammy, and the great thing about the ’80s Ibanezes is they’re pretty cheap. I also used my signature Ibanez Fireman, which is particularly resonant because it has a pretty big neck. I also used my Epiphone on the Brian May harmonies in “Hello North Dakota,” but I did minimal overdubbing.

I also used a Marshall JTM IC with an 8″ speaker and a Princeton Reverb. I ran them both totally clean and used three main distortion boxes – one is the JHS PG-14 Distortion Pedal, which is my signature pedal. The others were the TC Electronic MojoMojo Overdrive and a Supro Drive. Sometimes I use them in combination. Another pedal I used was the Mini Vent II, which is a Leslie simulator. Having a Leslie and a slide together can be a nice combination.

Werewolves of Portland is a very positive record despite the world’s social climate.
Before everybody went graffiti-crazy in Portland, I could feel it was an angry city. In my own life, I’m a grateful person. I wake up every morning and see all these guitars and say, “I get to do this!” My expectations are always pretty low (laughs). When good stuff happens to me, I’m thrilled. I look at my existence and go, “This is amazing!”