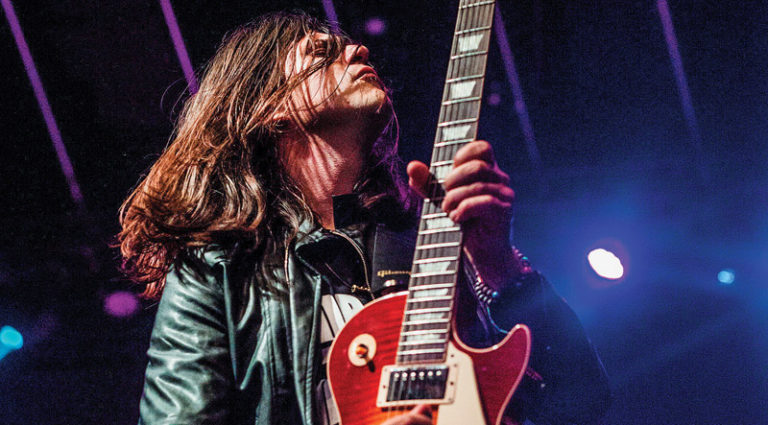 The “Is rock dead?” debate rears its head every few years. But with the emergence of new bands like Dirty Honey, good ol’ rip-roaring rock and roll is still very much alive – as evidenced by the band’s self-titled full-length debut. Driving the band’s sound are the durable guitar riffs provided by John Notto, who, it turns out, prefers vintage gear.

I always play through my 1981 Marshall JCM800 head set basically clean because I want that brittle spike through its cabinet. I also had a couple of different plexi reissues that brought the warm/creamy overdrive. I love the variation of blending those.

For a lot of the solos, we opened the door to the amp booth and we’d turn on the mics in the drum room. I’d stand right up against the speakers so they’d start to get this kind of squeal. It changes the tone when you get close to that kind of volume – it’s pretty awesome. And I did use my Fulltone Octafuzz.

Which songs are you most proud of, guitar-wise?
The solo on “The Morning” is that 335, and I get into that Angus/Slowhand thing perfectly on that. The tone is through the roof. I love the riff of “California Dreamin’” so much, and I’m very proud of not just the solo but the structure of that part of that song, how it jumps a key. I think it’s a really well-written song. I’m really proud of the riff and the solo in “Gypsy”; it’s a fun “drive your car fast” kind of song. The solo on “Tied Up” is the least indulgent. It’s almost like “a part,” which was intentional because I thought it fit the song. It’s hard to choose because I pride myself on picking what’s best for the song rather than being, “Alright guys, time for me to rip.” I think that’s the brand of our music – it’s always musical, even when I’m taking a solo.

You play other instruments, too…
Not as well (laughs)! At home, I have this cool garage that was converted into a guest house, and we converted the guest house into a studio. I’ve got a drum set, a bass, and a piano, so I hack it out on those when it’s just me. If I have a riff, a verse, and a chorus idea, I’ll record it and play all the other parts, too. It certainly doesn’t sound like Dirty Honey, but it gets the point across. Especially for Marc [Labelle, singer], it gets him going. Once I get that green light, I take it to the others, and it becomes Dirty Honey.

You spent four years studying music at the University of Southern Maine.
Yeah. It was kind of a mix. In some ways, it was a detraction from my truth. But in other ways, it strengthened me as a musician. I just love guitar playing and music – I love harmony – but I don’t like being nerdy about it; I’m not obsessed with technique or technical stuff. But I can listen to a Chopin piece and be enthralled – excellence is excellence to me. Overall, there isn’t much of that education that I can directly point to in Dirty Honey music… at all. When you go to music school, they can’t teach you how to be an artist, to be creative, to find your own voice. They show you how to practice general musicianship. But being a musician helped me get work, move to L.A., and stay on my feet. And when I met Marc, we started working on his.

Who were your guitar influences?
It was really whatever was in my mom’s record collection – Jimmy Page, Jimi Hendrix, Duane Allman. A little bit of Aerosmith. And then I got into Brian May and Angus Young. And of course, Slash – he’s kind of like “the last guitar hero.” As a teenager, I liked Trey Anastasio a lot – I thought that was a unique, different approach. And I love Derek Trucks.