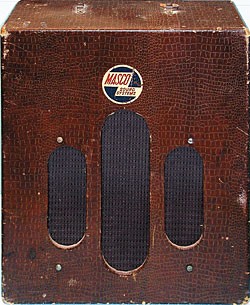 Before Leo Fender’s rise to prominence, which is to say, before anyone knew what the Platonic form of the electric guitar amplifier would ultimately be, a broad free-fire zone existed between general-purpose amplification, PA amps, and guitar amps.

Many companies covered all bases, as did Masco, a name that has come to prominence again largely in blues-harp circles, where vintage-minded blowers are fond of converting Masco PA heads into amps of the style Little Walter purportedly wailed through in the early days. Old Masco PAs can make great guitar amps, too, but the company did manufacture dedicated guitar combos right alongside its PA production in the 1940s and ’50s.

Our MAP-15 combo this issue isn’t a rare bird as such, but a lesser seen example of the species. This one comes to us courtesy of pickup maker Jason Lollar, who says it was his first real gigging amp. “I played a lot of gigs with it when I was 17 to 20 years old,” Lollar relates. “No mic, just straight amp with a boost pedal when I needed a little more volume and treble.”

With that vented speaker grille, buffalo covering, and one of the most wistful control panels in guitar-amp history, it’s a groovy contraption to have cut your teeth on, and a gutsy move for any kid to plonk it down on stage alongside the Peaveys, Fenders, and Ampegs.

A Sams Photofact Folder from 1947 tells us that Masco amps were manufactured in Long Island City, New York, by the Mark Alan Simpson Co (M-A-S-Co). Akin to the department-store brands that proliferated in the day, they were sold through electronics catalog retailers such as Archer and Lafayette, and were a semi-generic amp option at brick-and-mortar retail outlets as well. For all its prehistoric looks, this MAP-15 a pretty well-constructed beast – as are all Mascos – and not entirely as archaic as its aesthetics might imply. Where you’d expect a fiddly field-coil speaker, the MAP-15 carries a permanent-magnet Jensen P12T alnico speaker (although the Sams sheet indicates a previous field-coil version might have existed), and the transformers, including choke, are of a decent quality. These are true point-to-point amps, however, and I don’t mean the good kind (as in the Matchless format), but the kind that is a real rat’s nest of connections with caps and resistors linking components directly and no circuit board or terminal strip to impose some order on the clutter. 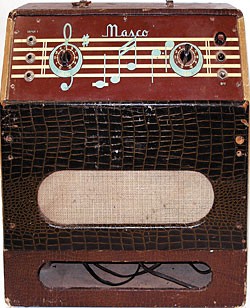 A pair of 6L6GAs occupies the output stage, but with only 320 DC volts on the plates and grids, these big bottles wouldn’t have put out more than around 15 to 18 watts, maximum (and early 6L6s weren’t capable of the output levels that their descendants would muster anyway). As such, their cathode bias is set with a relatively low-value 200-ohm resistor, and they’re fed by a humble 5Y3GT rectifier tube and a soft-filtering network consisting of a 16uF electrolytic cap either side of the choke – standard stuff for their day. More unusual tube choices arise in the 7F7 dual triodes that take preamp and phase inverter duties. These old octal tubes aren’t too dissimilar to the 6SL7s that would replace them in the MAP-15 in later years, and are a fairly high-gain and chunky-sounding tube. Good NOS examples are still readily available at just a few bucks each, too. Inputs 1 and 2 go to one half of the 7F7, and input 3 goes to the other half, with a hotter signal seen in the latter, thanks to different biasing configurations for each of the two triodes. Despite the independent input circuits for inputs 1/2 and 3, they share a single Volume control, as well as the simple treble-bleed Tone control. From here, it’s straight on to the soft and squishy (but rather fat-sounding) paraphase inverter, then onward to the 6L6s.

The OT in the MAP-15 is spec’d for 4 ohms, a fact that has probably escaped plenty of players who have replaced their flimsy Jensen P12Ts with sturdier speakers, but a lot of this old iron can be fairly tolerant of an impedance mismatch that isn’t too far out of the ballpark. In any case, a thoughtfully restored Masco with a good contemporary speaker is likely to sound better than the same amp with its original speaker, which is barely up to the task of reproducing the full 15-watt output anyway. All of this comes in a fairly flimsy cab, and the chassis doesn’t appear to have been built to last 20 years, much less 60. But hey, it’s a light lift, and if you avoid knocking it around, this Masco combo can make a surprisingly good-sounding club rig.

“The amp works best with brighter single-coil pickups,” Lollar says of his MAP-15. “It never gets plinky at lower volumes with cleaner tone settings. It always has a smooth, soft-ish attack with lots of sustain. When you turn it up halfway it starts to get creamy and dirty, and the tone turns from one with a full-range clarity to one with a prominent, tubey midrange.” He adds, “For two 6L6s, it’s not very loud – somewhat like a Princeton Reverb volume-wise.” But who needs volume, anyway? Some, perhaps, but probably not as much – or as often – as we think. No matter how you slice it, it makes for a tempting chunk of smoky 63-year-old tone.


Dave Hunter is an American musician and journalist who has worked in both Britain and the U.S. He is the author of The Guitar Amp Handbook and other titles.
1946 Masco MAP-15
Preamp tubes two 7F7
Output tubes two 6L6GA, cathode-bias, no negative feedback.
Rectifier 5Y3
Controls Volume, Tone
Speaker Jensen PM P12T
Output approximately 15 watts RMS
This article originally appeared in VG‘s July 2009 issue. All copyrights are by the author and Vintage Guitar magazine. Unauthorized replication or use is strictly prohibited.
Harmonica Amps Vol.37 Masco MAP-15 (1946)