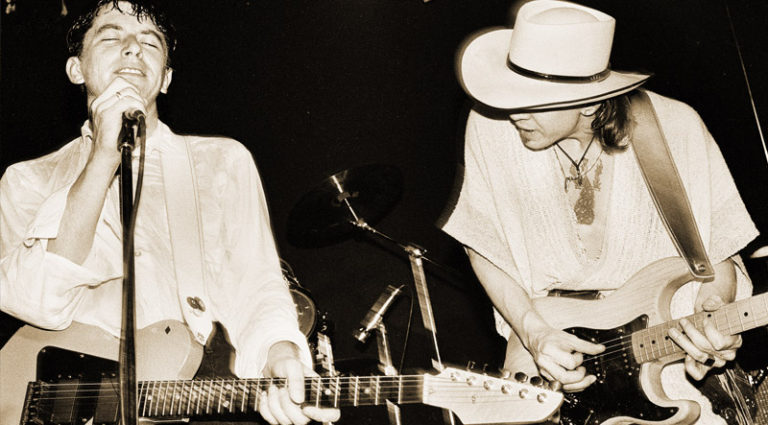 Among the vast papers, drawings, photographs, and tapes at Texas Tech’s Crossroads of Music Archive is a guitar beloved by the late Jesse “Guitar” Taylor.

Known as “Dice,” it was built by Ted Newman Jones while he worked as Keith Richards’ guitar tech during the Rolling Stones’ Tattoo You tour.

Jones (VG, December ’15), who passed away in 2016, was a larger-than-life personality who worked for Richards for more than a decade after traveling to Nice, France, where he crashed the Stones’ rehearsals for Exile on Main Street. After Jones’ full-time stint ended in 1978, Richards helped him set up a repair/build shop in Austin, and he soon forged relationships with local players including Taylor and Joe Ely.

After Taylor’s passing in 2006, the guitar stayed with his sister, Kathy, until being acquired by the Crossroads of Music Archive with help from benefactor Susan Barker-Benfield, wife of Larry Lange, who was the manager and (later) bassist for Taylor’s band, Tornado Alley. When the guitar arrived, Curtis Peoples labeled it an “artifact” and tucked it into storage, taking it only to be part of a display in a “West Texas Guitar” exhibit at the Buddy Holly Center in 2014. Then, one day in early ’18, he connected with Jeff Smith, the man whose passion for collecting guitars led him to help Ted re-launch the company.

“I was scrolling through Facebook and saw that Newman Guitars had posted a photo of ‘Tumbling Dice,’ talking about a reissue of Jesse Taylor’s guitar,” Peoples said. “I looked at it, then posted a picture of the original and said, ‘Jesse’s guitar is sitting next to me.’

“I knew David Lee Holt had the red Newman Ted built for Jesse, and that he’d sent it to them to make it playable. David helped me get in touch with Jeff, and that got the ball rolling.”

“Jacob Harper, who builds guitars for Jeff, replaced a broken machine head with the exact same type, and changed strings, but we didn’t get rid of anything – the screws are still rusty,” Peoples chuckled. “They just oiled them.”

Removing the neck from Dice revealed the name (written in the pocket) of Mark Younger-Smith, who did final assembly and other work in Newman’s shop. An ink stamp at the end of the neck says “128102,” meaning it was the second guitar made in December of ’81. Smith and Newman rushed the guitar to Taylor so he could play it when the Joe Ely Band opened for the Rolling Stones in Tempe, Arizona.

After Harper’s brush-up, Dice was returned to Peoples and, in May of 2018, he took it to the Dallas International Guitar Festival, where it was reunited with Taylor’s daughter, Nicole, who hadn’t seen the guitar since her father’s passing.

“It was great seeing family and friends experience Jesse’s legacy in a deeper, more significant way with the guitar making sound again,” said Smith, whose Dice reissue was inspired by a trip to the Big House Museum, in Macon, Georgia, where Richard Brent let him play Duane Allman’s ’57 Les Paul goldtop (VG, 11/08). “Playing the instrument of a fallen hero and hearing it, I was reminded that if a guitar can’t be played, it can’t be heard, and with the reissue I wanted to fully tell the history of Jesse’s guitars. I don’t think you can get closer to an artist after they’ve passed than by playing their signature instrument.”

Holt, who played in bands with Taylor, Ely, and others, recalled how Taylor kept his Newmans close at-hand.

“They had baseball-bat necks that were hard for me to get around on,” he said. “Jesse had catcher’s-mitt hands, so he didn’t have any problem, and they sounded really good when he played them. But, they were both in pretty tough shape because of his sweat and the makeshift repairs he’d done.”

Taylor, for decades a notoriously hard partier, was diagnosed with hepatitis C and cirrhosis that by late 2005 left him nearly debilitated. He called Holt one day and, for the first time, admitted to being very sick. “He had never copped to that – never said he was hurting or anything,” said Holt. “But that day, he was basically saying, ‘I’m about to die.’ And when he asked me to take the red Newman, I was flabbergasted.”

Ely’s Newman reflects his love of billiards, with its pool-table green finish and stripes-and-solids ball inlays. He used it into the ’80s before it was stolen; he didn’t see it again until a fan found (and returned) it 20-some years later.

Helmed by Smith, the modern Newman Guitars continues to offer models with bodies made of bubinga and cherry, Ted’s asymetrical soft-V neck profile with 24.75″ scale, and touches including pearloid binding, custom bridges, and pickup options. The Wings and 3D models have chambered bodies.

“Our body and headstock shapes are huge parts of Ted’s legacy,” Smith said.

They recently teamed with Danny O’Brien, a metal engraver known for his work on instruments custom-made in the ’70s and ’80s by British luthier Tony Zemaitis for superstar clients including Richards, George Harrison, Ron Wood, Eric Clapton, and David Gilmour.

“Danny is doing only original artwork on our guitars,” Smith added. “Each piece is unique.” – Ward Meeker

West Texas is famously diverse, with a musical history that reaches back centuries. While best-known for native Buddy Holly, the area produced many bigger-than-life performers, and its guitar hero was Jesse Taylor.

Emerging in the late ’60s as a cohort of singer/songwriter Joe Ely, Taylor’s career was a unique journey. Born in 1950, as a boy, he picked cotton to support his single mother and two siblings. After hearing other kids in his Lubbock neighborhood playing electric guitars, he saved money and bought his own at age 12, then spent hours each day learning to play Ventures licks, Chuck Berry double-stops, and Elvis Presley songs from the radio. Skipping rhythm chords, he cut straight to memorizing lead parts so he and his friends could play school dances in their new band, The Epics.

A renowned wanderer, Taylor was 16 when he hopped freight trains to play music in San Francisco, then Austin, where he and R&B singer Angela Strehli traveled to gigs in her VW Beatle.

While Lubbock bars kept players busy, many began to search for greener pastures after fellow Texan Johnny Winter put stars (and dollar signs) in their eyes by signing with Columbia Records for $600,000 in the late ’60s.

“By that time, Lubbock was big – 100,000 people – but it wasn’t big enough to sustain a bunch of bands that wanted to be working every night,” said Curtis Peoples, who directs the Crossroads of Music Archive at Texas Tech University.

Ely took buddies Gilmore and Butch Hancock to Nashville to make a folk album. After it failed to light fires, he spent a few years traversing America with a backpack and guitar, often hopping freight trains, seeking inspiration like Woody Guthrie had done. For one season, he worked as an animal handler with the Ringling Brothers Barnum & Bailey Circus until the day a horse kicked him in the ribs and, dropped by the blow, he was nearly trampled by elephants. He then returned to Lubbock and began writing songs for a dance-hall group that didn’t exist he until he assembled The Joe Ely Band.

By the early ’70s, the fickle tastes of music fans saw many notable Lubbockites migrating to a new hotspot – Austin, where the beer halls were pulsing with rowdy “redneck rock” ground out on solidbody guitars through loud amps. Ely and Taylor, by then playing together in a tougher, bluesier roots-rock style, were among the throng.

As part of Ely’s band and with a host of other performers, Taylor eventually played every major venue in Texas – Antone’s, the Armadillo, Continental Club, Soap Creek Saloon, Vulcan Gas Company, and others. He shared stages with Jimmie and Stevie Ray Vaughan, toured with a who’s-who of Texas heavy hitters including Billy Joe Shaver, Kinky Friedman, and Townes Van Zandt, and jammed with personal blues heroes like Willie Dixon and Muddy Waters. His studio credits included Ely’s first five albums as well as records by Gilmore, Hancock, Marcia Ball, and others.

In the late ’70s, Taylor became a hero to 16-year-old David Lee Holt, an emerging guitar prodigy who tagged along with older brothers whenever he played Lubbock’s Cotton Club.

“By then, Jesse had traveled the world,” Holt said. “I thought he was badass – and he was!”

After he’d settled back in Lubbock, in mid ’84, Taylor invited Holt to join him and bassist David Hamilton (as well as Richard Barnett, Robin Griffin, and Don Wise) in forming Tornado Alley; the band gigged for about a year, doing its final show at the third Tornado Jam benefit in ’85. By then, though, their blues-rock was being supplanted.

“Tastes shifted to pop and alt-rock,” said Peoples. “New wave was hitting – in ’84, a band from Lubbock called The Nelsons made it onto MTV’s ‘Basement Tapes’ with their video, ‘I Don’t Mind.’ They almost broke big – opened for Billy Idol and Culture Club.”

In the mid and late ’80s, blues returned to favor on pop-radio formats and MTV, thanks largely to Stevie Ray Vaughan. In ’86, Taylor was featured on the second Big Guitars From Texas instrumental LP, That’s Cool – That’s Trash.

Thanks in part to Taylor’s mentorship, Holt stayed busy through the ’80s, playing with roots-rock, alt-country, and blues acts such as Gilmore, Bill Carter, Rosie Flores, and others.

“Everybody loved Jesse, and his endorsement made it easier to be accepted to the Austin fold,” he said.

The connection ultimately led to Holt backing Carlene Carter on her 1991 tour, followed by a stint with the Mavericks during which he played lead on the group’s 1992 album, From Hell to Paradise, and its supporting tour.

In ’94, an Antone’s jam led to Holt co-founding Storyville with David Grissom, Tommy Shannon, Chris Layton, and vocalist Malford Milligan. The group became one of Austin’s biggest draws and recorded four albums including two for Atlantic Records, the latter containing the 1998 Top 30 hit single, “Born Without You.” He also earned membership in The Joe Ely Band, with which he appeared on four albums from ’93 through 2015.

Taylor’s discography grew to include the 1990 solo disc Last Night, followed by Rhythm Oil (’93). In ’98, he reunited with Ely for Twistin’ In The Wind and Live At Antone’s. He also recorded a second solo album, Texas Tattoo. In 2002, he released South Side Guitar with John X. Reed and the Ventures’ Nokie Edwards, and in ’03 was included in the music documentary Lubbock Lights.

Taylor was just 55 when he died in March of 2006, after suffering complications of hepatitis C and cirrhosis. The following day, he was inducted to the Texas Hall of Fame during the annual Austin Music Awards.

This article originally appeared in VG’s December 2019 issue. All copyrights are by the author and Vintage Guitar magazine. Unauthorized replication or use is strictly prohibited.